The 4 Hours of Silverstone saw changeable weather with sunshine and heavy showers which set the stage for an incident packed and drama filled race for the fans to enjoy. 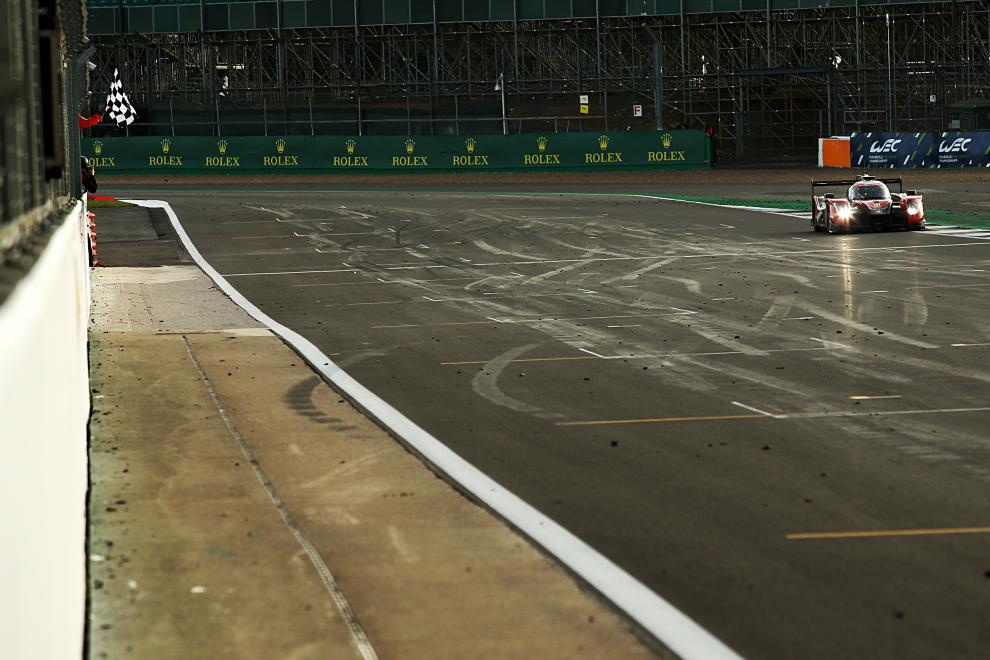 The UK round of the 2019 European Le Mans Series was won by the no28 IDEC Sport Oreca with Memo Rojas taking the chequered flag after the no26 G-Drive Racing Aurus pitted for fuel four minutes before the end of the race.

The no13 Inter Europol Competition Ligier of Nigel Moore closed down a two minute gap to catch the no11 Eurointernational Ligier of Jens Petersen in the final hour of the race.  Petersen took the flag first but was given a 30 second penalty for not coming into the pits for a Black and Orange flag earlier in the race.

The no88 Proton Competition Porsche 911 RSR was victorious in LMGTE, with Thomas Preining taking the flag 27.8 seconds ahead of the no83 Kessel Racing Ferrari of Rahel Frey.

The race started in dramatic fashion with the track being declared wet at the start as the rain clouds on the horizon got closer. The no21 DragonSpeed Oreca of James Allen kept the lead while behind the leaders there were a few cars that went off at the first corner, with all rejoining the battle.

In LMP3 the no17 Ultimate of Jean-Baptiste Lahaye took the lead ahead of pole sitter Yann Ehrlacher in the no19 M Racing Norma.

In LMGTE, it was the no60 Kessel Racing Ferrari out in front at the start with Sergio Pianezzola moving ahead of the no88 Porsche of Gianluca Giraudi, the Italian dropping back to 3rd as the no83 Kessel Ferrari of Michelle Gatting moved up to second place.

The rain that had been forecasted duly arrived and most of the grid dived into the pits for wet tyres after just 5 minutes of racing. The no21 DragonSpeed of James Allen didn’t pit and stayed out on slicks gambling that the rain would quickly clear. Mikkel Jensen made the same gamble in the no11 Eurointernational Ligier and the Dane found himself in the class lead.

The no43 RLR MSport Oreca of Matthieu Vaxiviere was revelling in the wet conditions, the French driver moving up the field to take the lead as the no21 DragonSpeed Oreca pitted for wets. Vaxiveire held an 18 second lead over the no23 Panis Barthez Competition Oreca of Will Stevens.

The no66 JMW Motorsport Ferrari of Wei Lu ended in the gravel at T7, bringing out the first Full Course Yellow of the race.  The car was quickly recovered and the race went green after only four minutes. A second FCY period was declared ten minutes later when the no22 United Autosports Oreca of Phil Hanson went off at Brooklands: the car lost all power and the British driver was forced to retire. 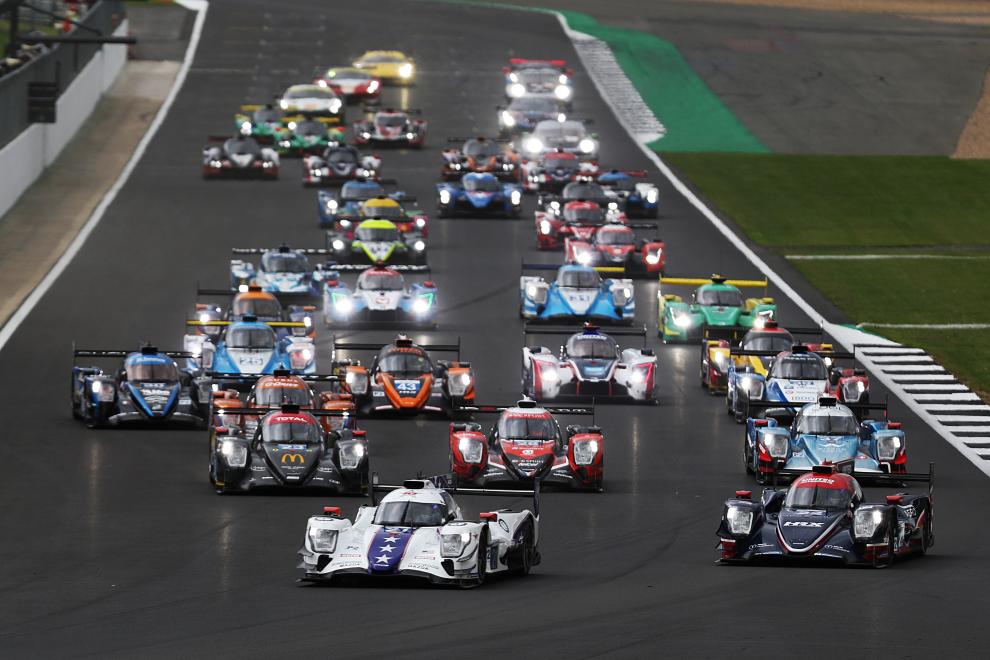 Once again the race went green very quickly after the car was placed behind the barriers at Luffield. The rain had stopped and the track had started to dry out. The no43 RLR M Sport Oreca was over 30 seconds ahead of the no24 Panis Barthez Ligier of Konstantin Tereschenko.  Mikkel Jensen also held a 30 second lead in LMP3 with Christian England in the no3 United Autosports Ligier in second. It was a Kessel Racing 1-2 as Sergio Pianezzola led in the no60 488 GTE, 15 seconds ahead of the no83 Ferrari of Michelle Gatting.

Matthieu Vaxiviere pitted from the lead to hand over to Canadian John Farano, rejoining the track with an 8 second lead. However, the more experienced drivers in the following cars soon caught and passed Farano, who was down to sixth a few laps later with James Allen back into the lead in the no21 DragonSpeed.

There was further woes for Farano when he was the innocent victim of a collision between the no30 Duqueine Engineering Oreca of Nicolas Jamin and the no14 Inter Europol  Competition Ligier of Sam Dejonghe. The no43 Oreca was clipped by the no14 Ligier and Farano had to return to the pits where a damaged wishbone needed replacing.  Nicolas Jamin was given a drive through penalty for causing the accident.

A Safety Car was deployed when the no3 United Autosports Ligier of Mike Guasch and the no24 Panis Barthez Competition Ligier of Timothe Buret collided and the LMP3 car ended hitting the concrete wall hard. The American driver was conscious and taken to the circuit medical centre for checks.

After twenty minutes the race resumed only for a second Safety Car to be deployed almost immediately as the no37 Cool Racing Oreca and the no19 M Racing Norma collided, the Oreca ending up in the middle of the track and was hit by the no30 Duqueine Engineering Oreca.

With an hour to go the race resumed with the no39 Graff Racing Oreca of Jonathan Hirschi out in front of the field. The Swiss driver was judged to have acted dangerously during the Safety Car period and was given a drive through penalty. The no26 G-Drive Racing Aurus of Jean-Eric Vergne took the lead with Memo Rojas in the no28 IDEC Sport Oreca following.

Jens Petersen in the no11 Eurointernational Ligier was nearly a lap ahead of the no13 Inter Europol Competition Ligier of Nigel Moore, the British driver lapping over five second faster than the leader.

In LMGTE the no83 Kessel Racing Ferrari of Rahel Frey was leading with the no88 Proton Competition Porsche of Thomas Preining closing rapidly.  The Austrian passed the Swiss driver on the run into Stowe Corner and started to open up a gap. The no51 Luzich Racing and no60 Kessel Racing Ferraris were battling hard for third place with the no60 488 getting the upperhand.

With 30 minutes to go Ben Hanley in the no21 DragonSpeed was out in front, passing the no26 G-Drive Aurus for the lead.  However, it was short lived when Ben Hanley had to pit and Jean-Eric Vergne went back into the lead ahead of the no28 IDEC Sport Oreca and the no39 Graff Oreca 07.  It looked like Vergne was heading for the Russian team’s third win in a row, but the French driver had to pit for a ‘splash and dash’ fuel stop. This put Rojas into the lead and the victory.

The no11 Eurointernational Ligier was being caught by the no13 Inter Europol Ligier but it looked like Petersen was going to hold on.  But disaster struck when the team received a black and orange flag to bring the car in to repair a damaged splitter.

The German driver stayed out and took the chequered flag but was issued with a drive through penalty converted to a 30 second time penalty, dropping the no11 Eurointernational Ligier down the order. This promoted the no13 Ligier of Martin Hippe and Nigel Moore into the class winning position.

In LMGTE the no88 Proton Competition Porsche crossed the line to take a debut ELMS win for Thomas Preining, Gianluca Giraudi and Ricardo Sanchez, with the no83 Kessel Racing Ferrari of Michelle Gatting, Manuela Gostner and Rahel Frey taking their second podium finish of the 2019 season.

CLICK HERE for all the results from Round 4, the 4 Hours of Silverstone