Hayden Paddon surprised the WRC community in Italy with a stunning run to 2nd after he led the winner, Seb Ogier until a gearbox problem ended his charge 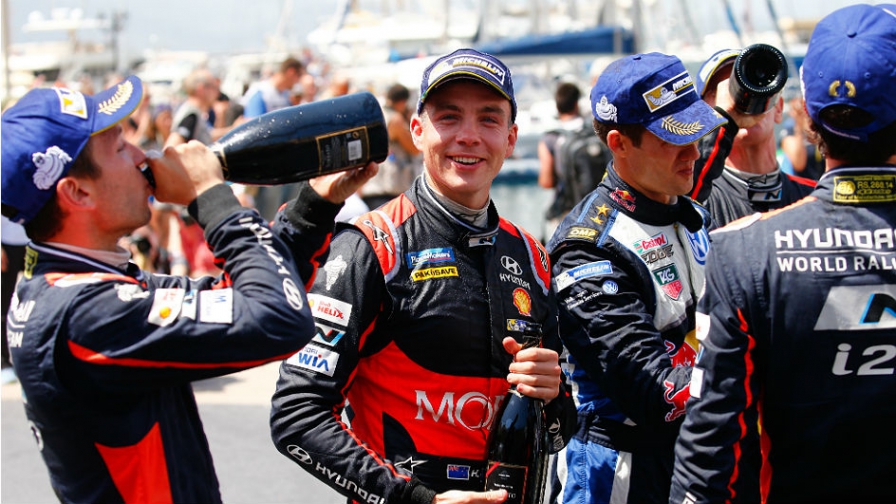 Sébastien Ogier claimed maximum points from Rally Italia Sardegna on Sunday after winning both his fourth WRC event of the season and the final live TV Power Stage.

After a fierce fight with Hayden Paddon, Ogier eventually enjoyed a comfortable 3min 05.3sec victory in his Volkswagen Polo R over the New Zealander, who produced the surprise of the rally by heading the world champion for almost two days.

After problems late yesterday, Paddon’s consolation was a career-best second in a Hyundai i20. Belgium’s Thierry Neuville finished 4min 22.5sec off the lead in third, ensuring two podium places for the Korean manufacturer.

Ogier was the only frontrunner to avoid major problems as the rocky roads took a heavy toll. He leads the championship by 66 points from Citroën’s Mads Østberg, with seven of the 13 rounds remaining.

The Frenchman overcame the handicap of sweeping gravel from the roads for the opening two days, and only demoted Paddon, in his first full WRC season, when the Kiwi spun and later hit a rock and damaged his gearbox.

“It’s been an amazing weekend – definitely the drive of my career so far,” Paddon told wrc.com. “The result is more than we were hoping for from the whole year! I guess the difficulty now is that my expectations are raised a lot more for the rest of the season – but we can probably try to be on the podium a couple more times.”

“For sure it’s not a one-off, but at the same time I’ve got to keep realistic, keep my feet on the ground and do things step by step.”

Paddon became the first New Zealand driver to lead a WRC round outside his home country. But with victory gone after yesterday’s problems, he eased through the final day, hiding the fact he was nursing his car.

“We still had some damage from the impact yesterday so we were lucky to get here,” he said after the final stage. “I’m very relieved, it was a massive weekend but there’s more to come yet,” he promised.

Neuville climbed to third this morning after Østberg went off the road in the opening stage and damaged his DS 3’s brakes. He limped through the final three tests, falling behind both Neuville and Elfyn Evans but holding off Jari-Matti Latvala.

After driveshaft problems on the opening day, Evans recovered to finish fourth in a Ford Fiesta RS, 1min 12.3sec behind Neuville and more than two minutes clear of Østberg. 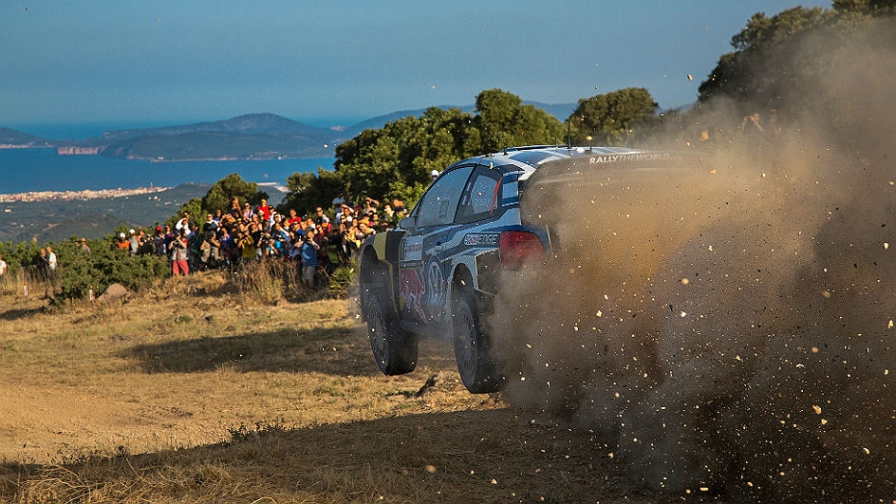 Latvala threw everything at his attempt to overhaul Østberg, but fell 16.6sec short and settled for sixth in another Polo R. The leaderboard was completed by WRC 2 trio Yurii Protasov, Paolo Andreucci and Jan Kopecky, and Khalid Al Qassimi. 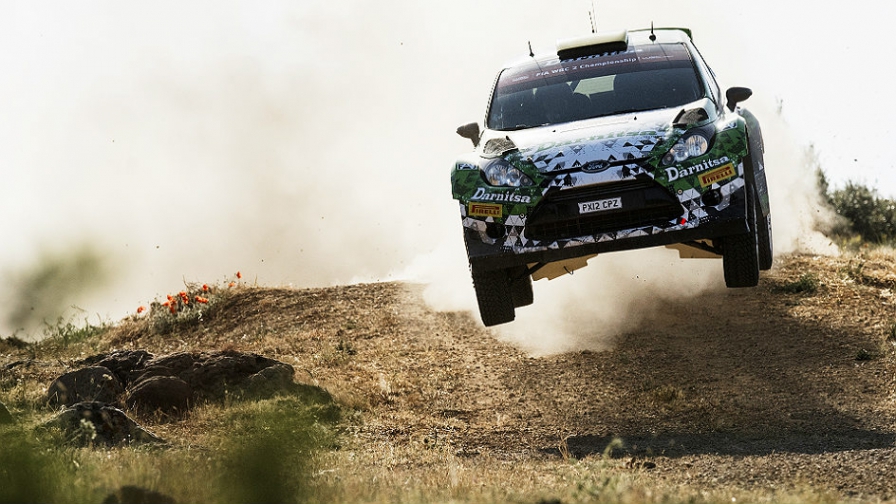 Yurii Protasov spoiled Paolo Andreucci’s 50th birthday celebrations by defeating the Italian by 5.6sec in a dramatic finale to the WRC 2 support category at Rally Italia Sardegna on Sunday

An opening stage puncture cost Protasov his overnight lead and left multiple Italian champion Andreucci with a 6.7sec advantage, and on the verge of making the most of his birthday present of a one-off WRC appearance.

But he damaged the radiator of his Peugeot 208 T16 in the same stage and Protasov struck back to regain the lead in the next test. They were split by just half a second going into the final stage, but Protasov did enough to claim the win.

“It wasn’t an easy way to win but definitely a more interesting way,” he said. “When I had the puncture I didn’t think it was all over. I had the power to push hard – and that was enough!”

Andreucci led for virtually all the opening two legs, but Protasov paced himself before charging up the order from fourth to first last night in his Ford Fiesta RS.

Jan Kopecký finished third in a Skoda Fabia R5, a further 2min 44.0sec behind, with Abdulaziz Al-Kuwari fourth. Nasser Al-Attiyah recovered from an opening leg crash to take fifth in a Fiesta RRC, and that promoted the Qatari into the championship lead.

Germany’s Armin Kremer completed the top six in another Fabia R5 after a damaged turbo pipe sent Nicolas Fuchs from an overnight fifth to seventh in his Fiesta R5.

Gianluca Linari won the Production Cup category within WRC 2 in a Subaru Impreza by more than 14 minutes from Joan Carchat. Linari now leads the championship. 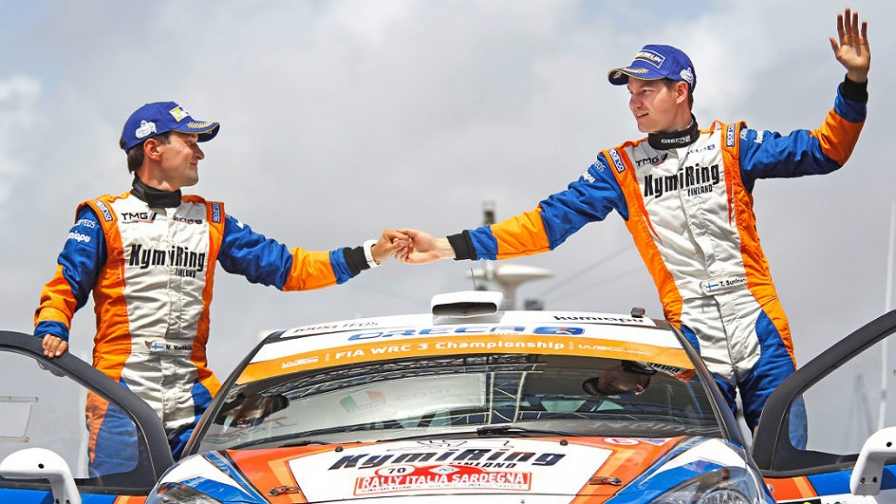 Finland’s Teemu Suninen spoiled hopes of a home win in WRC 3 at Rally Italia Sardegna when he headed a trio of Italian drivers into Sunday’s finish.

He won by more than 15 minutes from Andrea Crugnola, with Fabio Andolfi in third, a further five minutes in arrears.

Crugnola led after the opening leg in his Renault Clio R3T but retired on Saturday with a water leak in his engine. He was joined on the sidelines by Andolfi, who rolled his Peugeot 208 R2 and Suninen, who stopped with mechanical problems after pushing his car into the finish of SS15.