The 43rd edition of the Sezoensrally in Bocholt was of a particularly high level. The entire top of the Belgian Rally Championship came at the start of this fifth round of the season and the drivers did not disappoint. 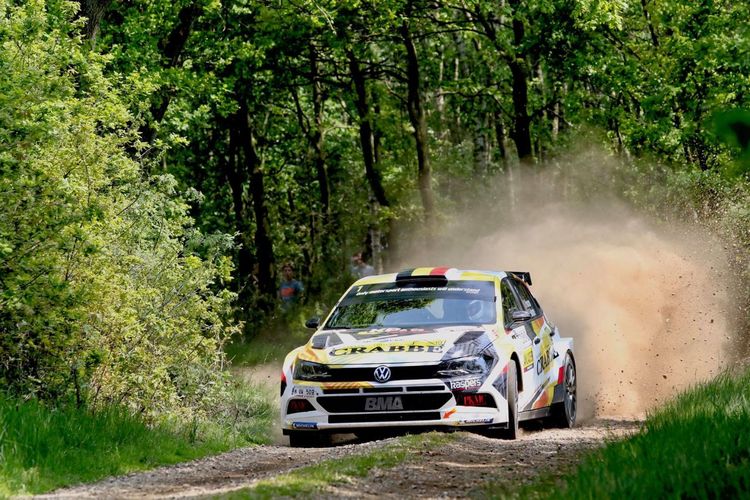 Kris Princen drove a perfect opening stage and then checked his lead, although the lead was limited. First he was hunted by fellow VW pilot Cédric Cherain, until the Liege citizen crashed. Then Sébastien Bedoret, picked up a puncture on the  very last stage. For example, Vincent Verschueren finished in a very good 2nd place at just 12 seconds from winner Princen.

“This morning the course was very treacherous, because under the trees the asphalt was still wet. I had opted for a soft slick and that was the right choice. I was able to take a bit of distance. In the afternoon it kept going fast, but the car felt perfect. The new differential made the Polo R5, a brand new one that was delivered this week, a lot less nervous. This is a very nice victory. My third victory of the season. to ride in Ypres and defend our leader’s place in the championship, “said Kris Princen.

Vincent Verschueren was very relieved with second place: “It is great that we can ride top times again. This morning I lost a bit of time because I chose the hard tires and because the shock absorbers were not optimal for late braking. In the final lap I gave everything to be the first Skoda driver to finish, “laughed Verschueren, who was able to reverse the 3 tenth gap on Sébastien Bedoret in the last two tests to a 2.4 lead.

“It was bending or cracking in the final tests, because both Verschueren and Fernémont were pushing for the podium. I am happy about the times we played on the unpaved, given my limited experience,” said Sébastien Bedoret, who 4th is in the intermediate position of the Jobfixers BRC.

Adrian Fernémont lost a little too much time at the start of the game with a too cautious strategy to play along for the win. The winner of the Wallonia Rally took a nice 4th place out of the fire, just before Cédric Cherain, who lost his second place when he had a puncture in Gerdingen and lost 33 seconds. “There was more in it, but this season we are daring each other in the Belgian championship that 33 seconds loss of time immediately takes a few places. It was since 2014 that I was still driving here, so I knew that following Princen was almost impossible. Kris was very strong, but a second place would have been nice, “Cédric Cherain, co-leader in the championship with 60 points, said the same as Kris Princen.

Patrick Snijers, was forced to retire when he broke the transmission on his VW Polo R5 just when he found the right rhythm, the 6th place went to Ghislain de Mevius. He finished strong, but lost too much time in the opening round due to a lack of course knowledge and two sliders.

Pieter-Jan Michiel Cracco sent his Skoda to 7th place on 1’27 “, a difference that certainly had resulted in a podium place a few years ago. The top 10 was further completed by the Irishman Stephen Wright and the Dutchmen Erik Van Loon and Michiel Becx .

In the Juniors and in R2 there was no measure at Grégoire Munster, who once again showed his class. Timo Van der Marel became second in R2 behind his Opel teammate. In the Pirelli Junior BRC, the podium was completed by Gilles Pyck, who debuted on the Maas Pebble, and Tobias Brüls, a regular customer for a podium place.

The M-Cup was dominated from start to finish by Gunther Monnens. The regional driver was faster than title holder Franky Boulat. Philip Lommers, the Criterium champion, finished third.

In Historic, Dirk Deveux was the strongest for Guino Kenis. Arthur Kerkhove, fourth, remains leader in the Historic BRC standings. In the Criterium the victory went on the very last test to Frederik Vandeloock, who could benefit from a flat tire for leader Johnny Louies.

Of the 49 teams started, 32 teams reached the finish of this sunny and hugely exciting 43rd Sezoensrally.