The Belgian squad’s #31 crew of Dries Vanthoor, Chris Mies and Kelvin van der Linde established themselves as the hot favourites for tomorrow night’s Super Pole in the process, leading the 20 cars that will take part in the deciding two-lap shootout with an average time of 2m35.097s. 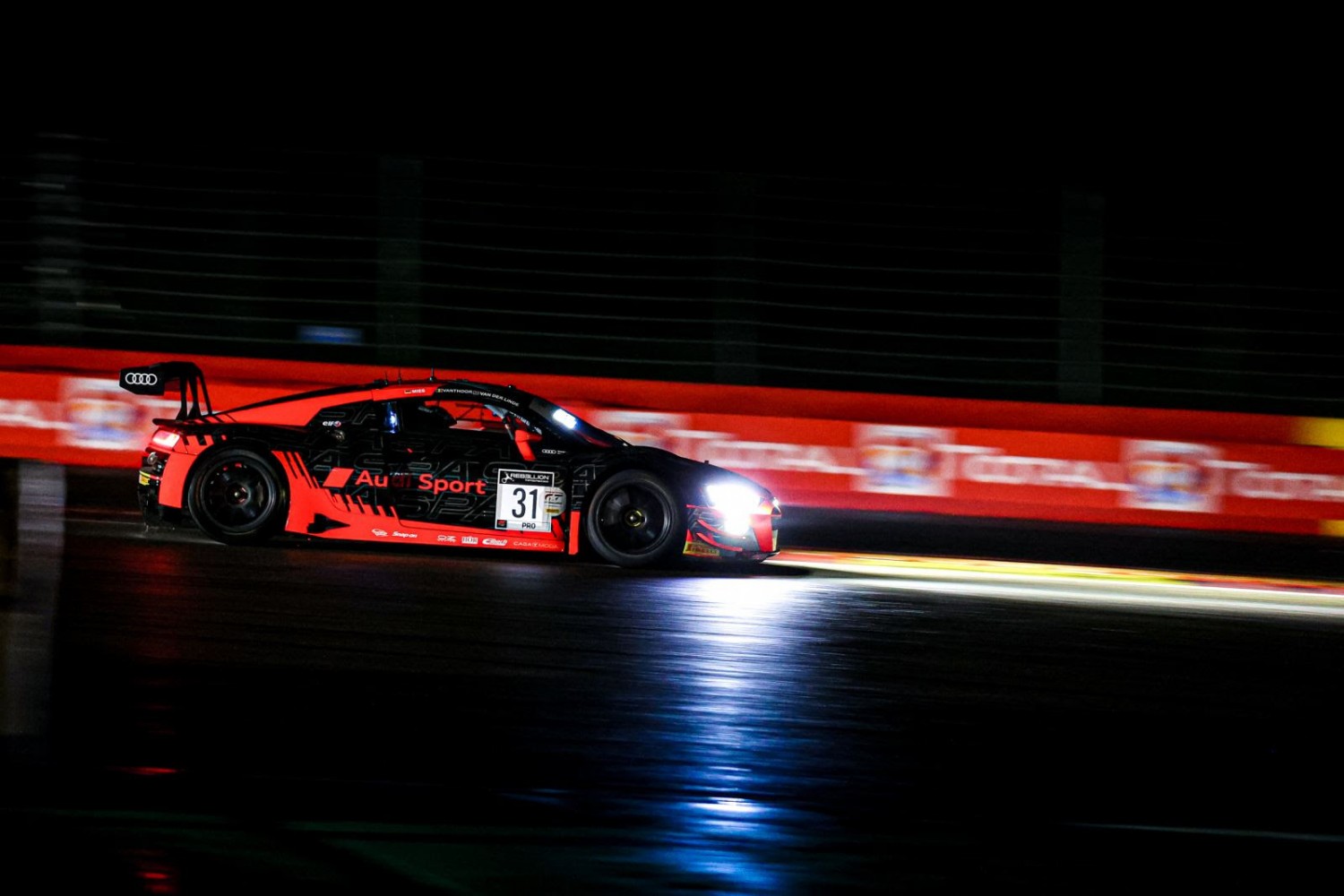 They did so in the sort of conditions for which Spa is revered and respected in equal measure. Rain began falling at the Ardennes venue shortly before qualifying began at 18.55. Combined with the rapid onset of darkness, this created a daunting task for the drivers waiting to take to the track.

They handled the challenge with tremendous aplomb. Indeed, all four qualifying sessions were completed without interruption, despite upwards of 50 cars taking part on a treacherous circuit.

The #31 WRT crew began with local ace Vanthoor posting the second-fastest lap in his segment, after which Mies and then Van der Linde both set the quickest times of their respective sessions.

This gave the Audi Sport Team WRT trio an advantage of 0.185s over the #12 GPX Racing Porsche of Matt Campbell, Patrick Pilet and Mathieu Jaminet. Indeed, Campbell was the only man to topple the WRT squad, the Australian ace beating Vanthoor by an impressive 0.725s in their qualifying segment.

In what was a fantastic night for Porsche, the #12 GPX Racing crew was the best of seven 911 GT3-R runners to earn a Super Pole spot. Audi will have five representatives, while Mercedes-AMG (three cars), Ferrari (three cars) and Lamborghini (two cars) will also have a shot at the front row of the grid tomorrow evening.

So will the #89 AKKA ASP Mercedes-AMG, which is also guaranteed pole position in the Silver Cup class after Alex Fontana, Lucas Lergent and Benjamin Hites produced a fine performance to book their place among the Super Pole contenders. Their average time was the 17th best overall, placing them ahead of several highly rated crews.

Among those to miss out was Spa’s record wins holder, BMW, whose pair of Walkenhorst Motorsport-run M6 GT3s will start 24th and 32nd respectively on Saturday afternoon. K-PAX Racing’s #3 Bentley will start from 26th, while the sister #9 car did not run in qualifying and will begin the race from the very back of the grid. Team Honda Racing (29th) and Optimum Motorsport’s #69 McLaren (30th) also missed out on a place among the Super Pole runners.

Pro-Am pole was settled in favour of the #991 Herberth Motorsport Porsche, which will start from 35th overall and two spots clear of its closest class contender. Daniel Allemann, Ralf Bohn and twins Alfred and Robert Renauer set the times and added further success to Porsche’s fine qualifying showing.

The Am Cup class will be led away by the #129 Raton Racing Lamborghini. Christoph Lenz, Michael Petit, Stefano Costantini and Lucas Ayrton Mauron put the Italian squad ahead of its competitors in 51st position overall.

Super Pole will take place tomorrow at 18.20, just as darkness is falling over Spa-Francorchamps. Each crew will nominate just one driver, who will complete two flying laps of the 7km circuit. They will run in reserve order to their finishing positions in tonight’s session, with Audi Sport Team WRT taking to the track last in the battle for top spot. All of the action will be streamed live on the Total 24 Hours of Spa website, the event’s official Facebook page and the GT World YouTube channel.

Kelvin van der Linde, #31 Audi Sport Team WRT: “All credit to the team, because after pre-qualifying we were not so happy with the set-up of the car. That was obviously in the dry, and this was in the wet, so that seems to suit us. Now we’re going to start the rain dance for Super Pole! I’m really excited for tomorrow and the rest of the weekend.”