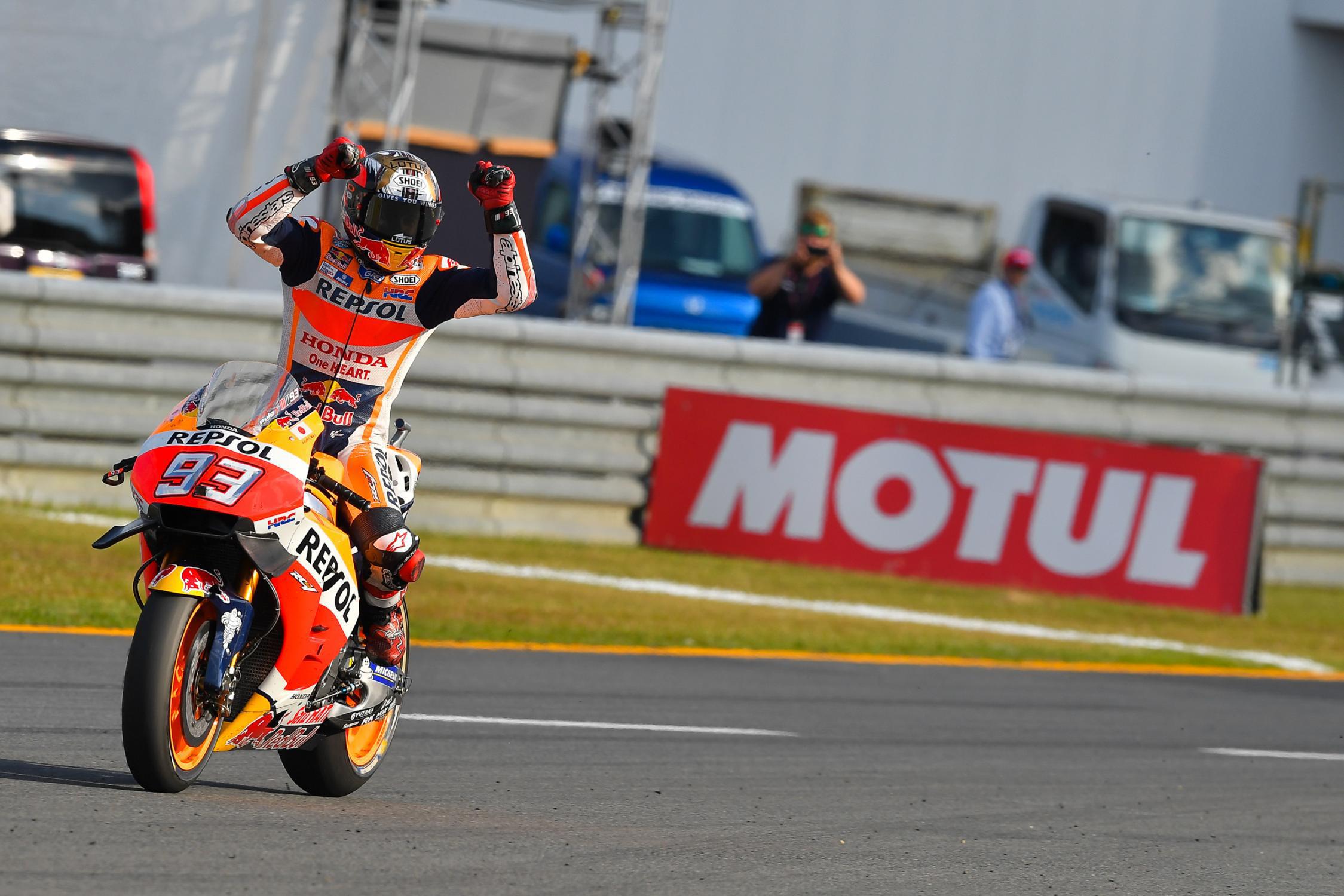 Isle of Man – based Crutchlow continued his recent superb form to finish fifth on the LCR Honda for the second grand prix in a row. Redding returned to the top ten in ninth place on the Pramac Ducati. Oxfordshire’s Smith, who has missed the last three races with a serious knee injury, gritted his teeth on his return to finish 13th riding the Monster Tech3 Yamaha. Irishman Eugene Laverty failed to finish a grand prix for the first time this season when he crashed.

It was a tough day for the British riders in the smaller classes. Sam Lowes crashed on the second lap of the Moto2™ race, while Danny Kent was forced to retire with a broken gear selector. John McPhee made the long trip from Scotland only to crash on the very first bend with two others at the start of the Moto3™ race.

Repsol Honda Team’s Marc Marquez has taken the 2016 MotoGP™ World Championship at the home of Honda – as Movistar Yamaha teammates Valentino Rossi and Jorge Lorenzo crashed out of contention. First was Rossi, into the gravel early – before Lorenzo’s ride through the pain barrier after a highside on Saturday was cut short; sliding out of P2 in the last few laps. Marquez, clear at the front, kept it on the road to take his third premier class title in four years, and his fifth victory of the year.

With a slow start for polesitter Rossi, it was Marquez who got the holeshot into Turn 1 – before Lorenzo quickly took the lead at Turn 2. With Rossi getting past Marquez soon after, Aleix Espargaro (Team Suzuki Ecstar) then took advantage to take the Italian legend. Rossi fought back, before a duel between the Movistar Yamaha of Rossi and the Repsol Honda of Marquez saw the two switching positions.

Rossi was first to fold, as the 9-time World Champion made a mistake and lost the front end of his Movistar Yamaha – leaving teammate Lorenzo as the last man standing in between Marquez and the crown.

Maverick Viñales (Team Suzuki Ecstar) broke away from LCR Honda’s Cal Crutchlow to get on the hunt back towards the podium, with teammate Espargaro falling back into his clutches as Andrea Dovizioso (Ducati Team) began to hunt down Lorenzo.

‘DesmoDovi’ made some inroads before an uncharacteristic error from the reigning World Champion saw him follow teammate Rossi in crashing out. Marquez’ pit board informed the number 93 of the unbelievable situation he now found himself in. Dovizioso followed the new Champion over the line for a P2 finish, with Viñales completing the podium in another impressive ride ahead of team-mate Espargaro.

Cal Crutchlow came home in fifth as top Independent Team rider once again, with rival for that title, Monster Tech 3’s Pol Espargaro, just behind in sixth. Alvaro Bautista (Aprilia Racing Team Gresini) impressed with seventh for another great result for the Noale factory, with teammate Stefan Bradl compounding the joy for Aprilia as he completed a double top ten finish in P10. Octo Pramac Yakhnich pairing Danilo Petrucci and Scott Redding were the remaining puzzle pieces in that top ten, in P8 and P9 and only three tenths apart over the line.

Tom Luthi (Garage Plus Interwetten) has taken an impressive lights-to-flag win at the Twin Ring Motegi, getting the holeshot off the line from the middle of the front row and unleashing his ominous race pace – just as the former 125 World Champion did in 2014. Reigning Champion Johann Zarco (Ajo Motorsport) took second place, and Estrella Galicia 0,0 Marc VDS rider Franco Morbidelli converted his P3 start into third on race day after an incredible duel with home hero Takaaki Nakagami (Idemitsu Honda Team Asia).

The drama was quick to begin, as title contender Alex Rins (Paginas Amarillas HP 40) crashed on Lap 1 when trying to make up places from P22 on the grid. It wasn’t long before another title contender took a tumble – Sam Lowes (Federal Oil Gresini Moto2) – who lost the front end and slid into the gravel. Second in Aragon, Alex Marquez (Estrella Galicia 0,0 Marc VDS) was another crasher at the same corner.

Luthi was away at the front, with Morbidelli on his tail until the Italian began to suffer grip isssues. As the EG 0,0 Marc VDS rider slipped back into the clutches of Takaaki Nakagami (Idemitsu Honda Team Asia) and Zarco, with the Japanese rider running wide and letting Zarco past – cutting the gap little by little until a four tenth advantage kept breath held in the Garage Plus Interwetten garage on the final lap. Luthi held firm however.

Morbidelli and Nakagami staged a battle royale over the final few kilometres; the Japanese rider desperate to get past. Trying a number of moves but with Morbidelli hitting back, the Italian just held on to take another podium finish.

Sandro Cortese (Dynavolt Intact GP) had a solid ride to a good top five finish in his 200th GP start, with Simone Corsi (Speed Up Racing) taking sixth ahead of Italtrans Racing Team’s Mattia Pasini. Julian Simon (QMMF Racing Team) had an impressive ride to P8 after good pace in Warm Up, with AGR Team’s Marcel Shrotter dropping back slightly by the end of the race to end the Japanese GP in ninth. Xavier Simeon completed a double top ten finish for the QMMF team in P10.

The ‘Beast’ is back: Bastianini vs Binder down to the wire

Enea Bastianini (Gresini Racing Moto3) has taken an incredible photo-finish victory at the Twin Ring Motegi, with a last lap move on newly crowned Moto3™ World Champion Brad Binder that saw the two then cross the line almost neck and neck. The Italian also takes back second in the Championship standings with the 25 point haul, as EG 0,0 rider Jorge Navarro failed to score. Hiroki Ono (Honda Team Asia) took his first career podium and Japan’s first rostrum finish at Motegi since Hiroshi Aoyama in 2009 with a controlled ride to P3 as he fought off Italian duo Andrea Migno and Nicolo Bulega (Sky Racing Team VR46) – but was then disqualified for being under the minimum weight for bike and rider. Bulega therefore took the P3 on his 17th birthday.

Phillip Oettl took P5 over the line to head the second group, with Fabio Di Giannantonio in sixth to score good Championship points once again. Bagnaia held on the take P7 – ahead of RW Racing GP BV rider Livio Loi, who had also been third fastest on Friday in a good weekend for the Belgian. Frenchman Fabio Quartararo (Leopard Racing) took a solid top ten finish in P9, ahead of teammate and rookie Mir.