The odds were stacked against Michael van der Mark (Pata Yamaha Official WorldSBK Team) on Sunday. He started from ninth after Saturday’s astonishing win, his first in the MOTUL FIM Superbike World Championship. Ahead of him: the two works Kawasakis, an Aruba.it Ducati, and his teammate on pole, amongst others. 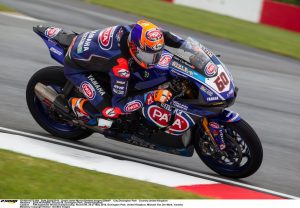 Van der Mark could have stayed complacent following Saturday’s display, but the Dutchman is quickly gaining a reputation for flipping the script on his Superbike rivals.

Van der Mark took the second win of his weekend and his WorldSBK career, once again showing how well he is able to read races. The Dutchman found himself again at the halfway stage with the rider in pole and Jonathan Rea (Kawasaki Racing Team WorldSBK) ahead of him. He repeated yesterday’s strategy to perfection, waiting for any quiver or mistake from the men in front, before setting off an ice-blooded attack at the Melbourne Hairpin, and jetting away into the distance.

“It’s incredible to take my first victory but even better to take the double this weekend”, the rider, still ecstatic, acknowledges. “Thanks to Yamaha and the team, they’ve been waiting so long for this. The win yesterday was already something I really wanted, but a double here is simply fantastic”.

In the early stages, it was enough for van der Mark to avoid any trouble in the middle of the pack and put his race-plan into motion: “Today in the warm-up we tried some small things and weren’t really fast, so we went out to the race without any stress. Starting from P9 is not ideal, especially in the first lap, some riders had some weird overtakes. I just tried to stay calm and find a clean way. Step by step I managed my way to the front”.

By that point, his teammate Alex Lowes (Pata Yamaha Official WorldSBK Team) was out in front, looking for his first WorldSBK race win. “Alex did a fantastic job leading the race for such a long time, I just tried to follow him because his pace was quite good”, he says. With him and Rea bickering for the lead, van der Mark managed to close them down and strike: “Johnny passed me, I just stayed calm and followed them, while they kept fighting. But then I managed to pass Johnny and managed to pull away”.

The indecisive weather was conditioning the Yamaha riders race before then, making him opt for a cautious approach: “We knew there was rain coming but nobody knew when. I saw a few drops of rain, and I think the guys, Alex, Johnny, slowed down a bit as well. I just wanted to follow them because they’re the first ones to try. On the other hand, the track was so warm that the bit of rain we had couldn’t make the track really wet”.

Now van der Mark heads into the midway point of the season having hit the perfect point of form. The Dutchman is just 18 points off Chaz Davies (Aruba.it Racing – Ducati) in second, and while the 82-point gap with Jonathan Rea may seem a step too far, with more results like these, van der Mark could turn many more WorldSBK predictions onto their heads in 2018.

No non-British rider had won at Donington Park since 2012, and from the practice sessions and Superpole, few would have predicted that would change today in race one. But Michael van der Mark (Pata Yamaha Official WorldSBK Team) threw out the script for the Prosecco DOC UK Round with a sensational ride, flying from sixth on the grid to his first ever win in the MOTUL FIM Superbike World Championship.

The psychological battle between the KRTs, leading the first row, started right from the start. Rea made it ahead at the lights, with the pair squabbling through sector one. Sykes struck back three laps later at the Old Hairpin but went wide at the Melbourne loop. Two laps later, an aggressive Sykes made it back in front, same move, same spot.

The Kawasakis were poised – and had been widely predicted – to dominate Donington weekend, but van der Mark threw a spanner in the works immediately, the only rider able to keep up with Rea and Sykes after passing his teammate Alex Lowes (Pata Yamaha Official WorldSBK Team). But stalking the KRTs was not enough for the flying Dutchman – Rea went wide at the Melbourne corner on lap 13, the same he’d done a few laps earlier, and van der Mark shot ahead into second.

A couple of laps later, he attacked again. Van der Mark stuck the nose in at Melbourne, yet again, closed the line over Sykes, and blasted away in the lead. But the battle was far from over here: Rea picked his teammate’s pocket around Schwartz with six laps to go, and shot after van der Mark, smelling blood. Yet today it was not to be for the defending champion, the Yamaha rider making no mistakes and meeting the flag.

Behind the sensational podium battle, Lowes finished in fourth, behind his teammate but scoring a fantastic finish at his home race. He will also have the consolation prize of leading the line at race two. Lorenzo Savadori (Milwaukee Aprilia) finally translated his great qualifying and free practice performances into a great race finish, making it in at Donington in fifth, ahead of his teammate, Eugene Laverty (Milwaukee Aprilia), in sixth.

Loris Baz (GULF Althea BMW Racing Team) made it in in seventh, with Leon Haslam (Kawasaki Puccetti Racing) finishing ninth following a thrilling battle with his teammate at Donington, Toprak Razgatlioglu (Kawasaki Puccetti Racing), who went to the floor on the final lap. Closing the top ten was Leon Camier (Red Bull Honda World Superbike Team) on his full WorldSBK return after injury.

Flying Dutchman rounds off amazing weekend ahead of surprising Razgatlioglu

The floodgates were opened Saturday, and now there’s no stopping Michael van der Mark (Pata Yamaha Official WorldSBK Team). The Dutchman closed an extraordinary weekend at Donington for the Pata Yamaha team with the second win of his MOTUL FIM Superbike World Championship career, a win against-all-odds in another fascinating race at the Prosecco DOC UK Round.

The first double for van der Mark, and the first podium for Toprak Razgatlioglu (Kawasaki Puccetti Racing) beating none other than Jonathan Rea (Kawasaki Racing Team WorldSBK) in the closing stages.

A poor start from Alex Lowes (Pata Yamaha Official WorldSBK Team) saw him gobbled up in the mix at the first turn, ceding two places to Lorenzo Savadori (Milwaukee Aprilia) and Leon Haslam (Kawasaki Puccetti Racing). The Yamaha managed to pick both off in short order, however, Haslam at the Fogarty Esses (before the wildcard crashed at Melbourne), and the Italian on lap two. Meanwhile, the two KRTs held a surprisingly aggressive battle, while the other Yamaha quietly made it through to the leading group from ninth on the grid.

Quickly, one third in, the battle for the race turned into a three-way fight, with Lowes sticking strong but Rea taking ghost shots around Craner and Melbourne. Meanwhile, van der Mark, much like he did on Saturday, stalked the front two, biding his time. At the back, Razgatlioglu and Savadori fought nail and tooth for fourth, a few seconds back on the leading group.

After two perfect thirds to the race, it all came apart for Lowes at the end. On lap 17, Rea found a spot at the Melbourne loop, where so many moves have been made over the weekend, and pushed in front from the inside of Lowes, with van der Mark picking off the scraps at Redgate and moving to second. And just like Saturday, one lap later, van der Mark made his race-winning move at that same turn 11. The Dutchman shot off from there, giving his pursuers no option to take away his incredible double.

There was one more surprise left at Donington, however. Amidst the front group bickering, Razgatlioglu found himself with the gap now non-existent. Showing an impressive late-race pace, the Turkish rider picked off Lowes with ease, before setting his sights on the three-time WorldSBK champion. And with one lap to go, he moved up to second. A fitting epilogue to Kenan Sofuoglu’s retirement in the last round: Turkey has a new hero for years to come.

With Rea finally in third, his worst result since the Thai round, and Alex Lowes repeating his Saturday performance in fourth, there was another comeback behind. Chaz Davies (Aruba.it Racing – Ducati) found his way all the way back to twelfth at the start, but a neat ride from the Welshman pushed him back to fifth, ahead of Tom Sykes (Kawasaki Racing Team WorldSBK), who couldn’t continue his incredible Donington streak and leaves with his first finish outside the podium since 2011.

Savadori made it to the chequered flag in seventh, just ahead of Leon Camier (Red Bull Honda World Superbike Team), who pipped Jordi Torres (MV Agusta Reparto Corse) to eighth at the final turns and leaves the UK round with two top-ten finishes on his return. Closing the top ten was Loris Baz (GULF Althea BMW Racing Team), with Marco Melandri (Aruba.it Racing – Ducati) ending a weekend to forget down in eleventh.