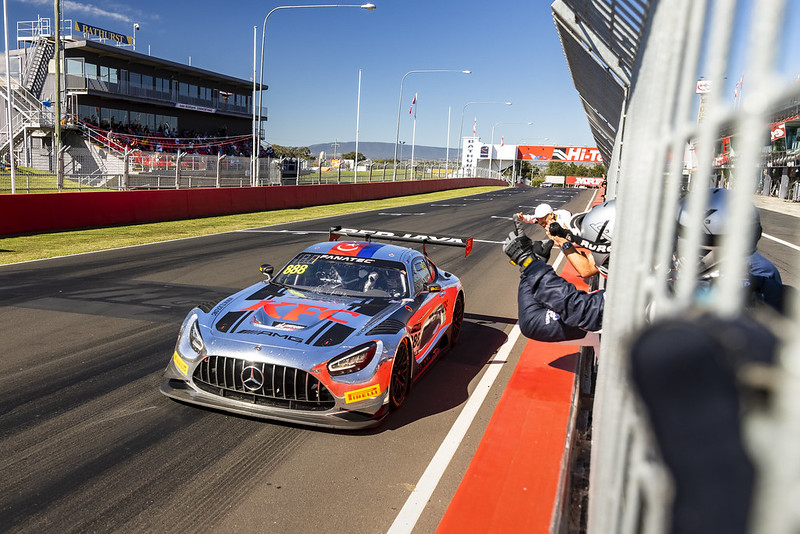 Shahin led from pole but the Hobson Motorsport Nissan GTR NISMO GT3 loomed large in his rear-view mirror throughout the opening stint.

When the mandatory pit stop sequence took place Tander emerged in the lead after taking over the #777 Audi from Shahin.

This came as the Supercars stars took over from their Pro-Am co-drivers in the respective entries.

Jumping in after Tony Bates in the #24 Audi, Chaz Mostert came out in second in front of van Gisbergen, who replaced Prince Jefri Ibrahim in the Triple Eight Mercedes.

Hobson momentarily re-joined in front of van Gisbergen when the Nissan driver finally served his stop, however, the newer Mercedes dragged by up Mountain Straight.

At this point, Mostert and van Gisbergen ran three seconds behind leader Tander with 20-minutes still to run.

However, the Mostert/Bates car dropped out of race-winning contention when they were handed a stop-and-go penalty for a pit stop infringement.

This gave second position to van Gisbergen who latched onto the back of race leader Tander in no time as the pair engaged in an epic battle.

With eight minutes to go van Gisbergen went down the inside at the final corner, but Tander managed to switch back and the duo ran side-by-side through Hell Corner and up Mountain Straight.

Van Gisbergen had the inside line for Griffins Bend and made the move stick before building a sizeable gap.

The Ibrahim/van Gisbergen combo won by 5.6s over Tander/Shahin, but the final spot on the podium was decided on the last lap.

A recovering Mostert passed Brad Schumacher for third with only a few corners to spare, giving the former and co-driver Bates something to cheer about.

Schumacher held onto fourth and was the best of the Trophy class runners, while the Grove Motorsport Porsche 911 GT3 completed the podium.

Stephen and Brenton Grove were hampered by a five-second penalty for a start infringement.