Helio Castroneves kept the No. 60 Meyer Shank Racing Acura ARX-05 ahead of the field during the final 30 minutes to lift MSR and co-drivers Tom Blomqvist, Oliver Jarvis and Simon Pagenaud to victory Sunday in the 60th anniversary of the Rolex 24 At DAYTONA. 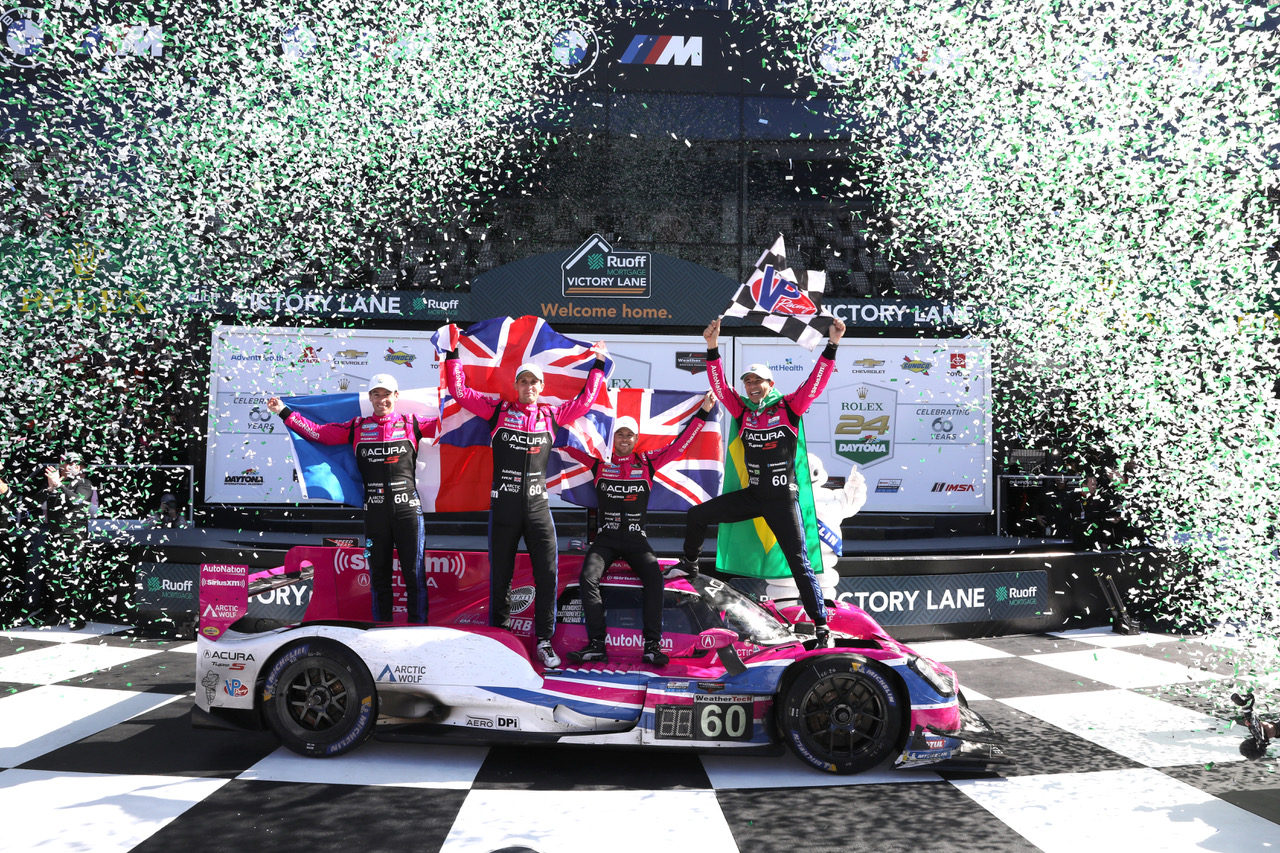 The win led to Castroneves’ signature celebratory move of climbing the fence, which he made famous during four Indianapolis 500 wins.

“It sounds cliche, but it’s all about believing,” Castroneves said. “I believe in them, they believe in me. This is exactly what is happening with this group here. With Simon, with Tom and with Oliver – we all believed that we could do it.”

It was Castroneves’ second consecutive Rolex 24 victory. Last year, he won the race as part of Wayne Taylor Racing, then climbed a fence in Victory Lane. This time, Castroneves fought off the No. 10 WTR Acura and driver Ricky Taylor to win, then stopped at the start-finish line and climbed the catch fence.

“That was absolutely incredible,” he said. “I’m so happy for the entire group. Everyone did their job. At the end, I said, ‘Put me in, Coach.’ It was great.”

The victory ended Wayne Taylor Racing’s bid to win the race for a record fourth consecutive time. As the Meyer Shank Racing celebration moved from the fence to the pits, Wayne Taylor was among the first to congratulate his former driver.

The trip to the top of the podium continued the resurgence of the career of Castroneves, 46. After winning last year’s Rolex 24 with WTR, Castroneves went on to win the Indy 500 with MSR, tying A.J. Foyt, Al Unser and Rick Mears for most Indy 500 wins in a career.

“It’s priceless,” Castroneves said. “In my case, I’m still very passionate about it and learning every day … and improving my driving skills. That’s what makes me a better driver. That’s why I enjoy it. That’s why when I go out there I push as hard as I can.”

Ricky Taylor finished 3.028 seconds behind Castroneves for WTR teammates Filipe Albuquerque, Will Stevens and Alexander Rossi. The 1-2 Acura sweep came 18 hours after both cars fell off the lead lap and trailed the five Cadillacs in the Daytona Prototype international (DPi) class.

The key to winning may have been the run by Blomqvist before Castroneves’ finishing run. Blomqvist got the No. 60 car into the lead with a back-and-forth duel with Taylor, then handed it to Castroneves.

“I was speechless after the race,” Blomqvist said. “I’ve dreamt of it. Did I believe? Yes. But you never know. It’s 24 hours of relentless racing. Every time I jumped in the car at moments I felt really comfortable and moments when I was like, ‘Man, I can’t get this car to work. It was just a rollercoaster of a race.”

In one of the most all-around dramatic Rolex 24 At DAYTONA races in history, the No. 81 DragonSpeed USA ORECA LMP2 rallied from five laps down to win the LMP2 class of the twice-around-the-clock race. Despite freezing cold conditions overnight at Daytona International Speedway, the group of highly-inspired young drivers were blazing fast come Sunday sunrise. 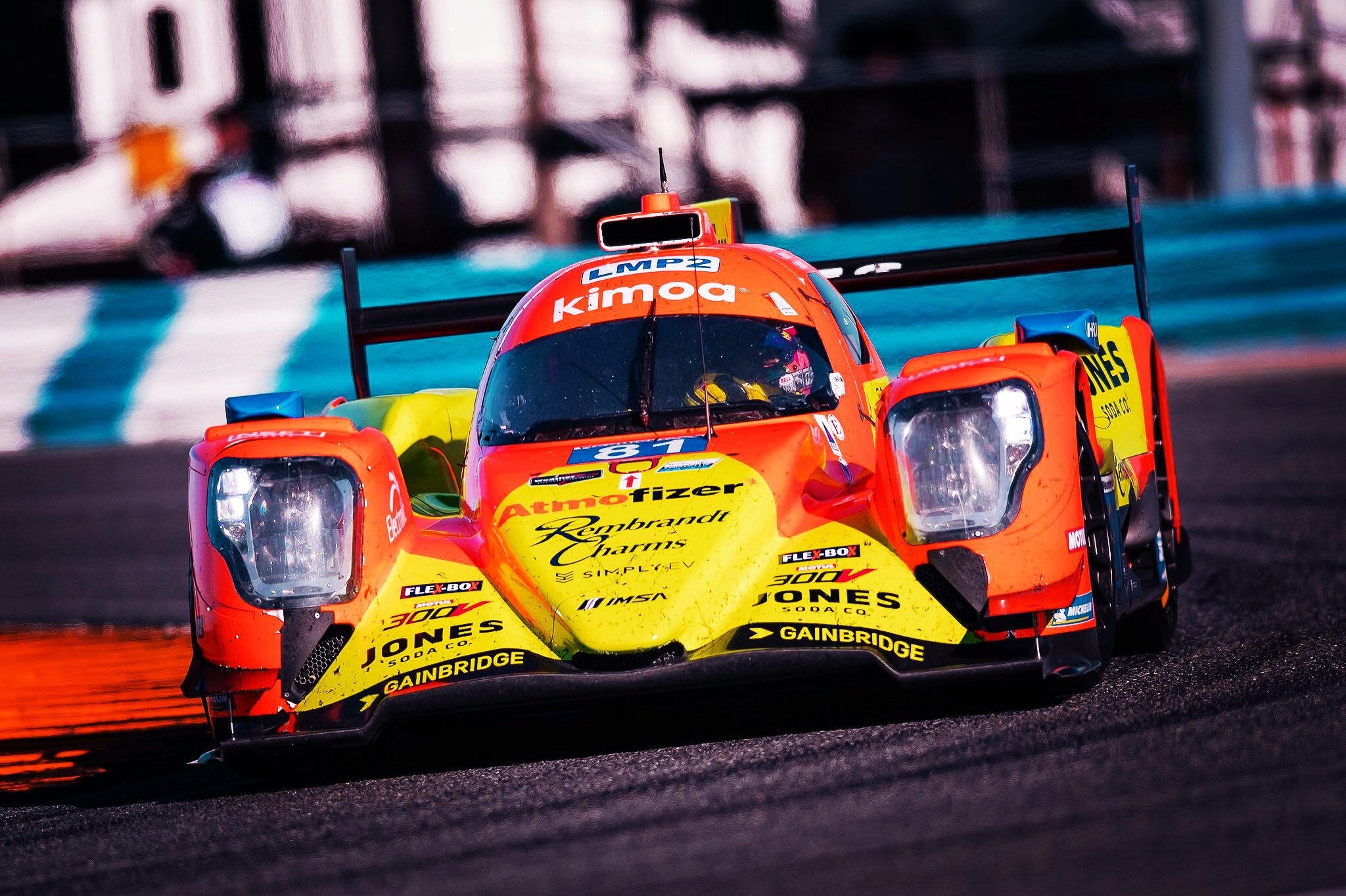 DragsonSpeed experienced problems right away – a technical glitch hampered pit road visits resulting in multiple speeding penalties that put it behind early. But the team finally got the system righted and it was go-time by nightfall.

Sports car veteran Eric Lux and IndyCar Series stars Colton Herta, Pato O’Ward and Devlin DeFrancesco kept making up ground in the class before ultimately handing over the car to Herta in the closing laps to bring home the victory.

“There isn’t one race on the schedule that’s easy to win,” Robinson said. “But when you do it with the team like we have, with Bill Riley and all the guys back at the shop, and all the prep we do, it does generate the results.

The winning car turned 723 laps over Daytona’s 3.56-mile road course with a margin of victory of one lap.

IMSA introduced the LMP3 class in 2021 and for Robinson it was like a duck to water. He won last year’s Rolex 24 then tacked on four more wins before claiming the inaugural championship. He has a series-leading six career LMP3 wins. Fraga, who took the car to the checkered flag, has five.

Be on the lookout for information for next year’s twice-around-the-clock classic by visiting www.daytonainternationalspeedway.com or by calling 1-800-PITSHOP.