DAYTONA BEACH, Fla. – The new GTD PRO class of the IMSA WeatherTech SportsCar Championship got off to the most spectacular start possible.

Mathieu Jaminet and the No. 9 Pfaff Motorsports Porsche 911 GT3 R emerged from a door-banging clash Sunday afternoon with the similar No. 2 KCMG Porsche driven by Laurens Vanthoor through Daytona International Speedway’s Le Mans Chicane on the very last lap of the Rolex 24 At Daytona. 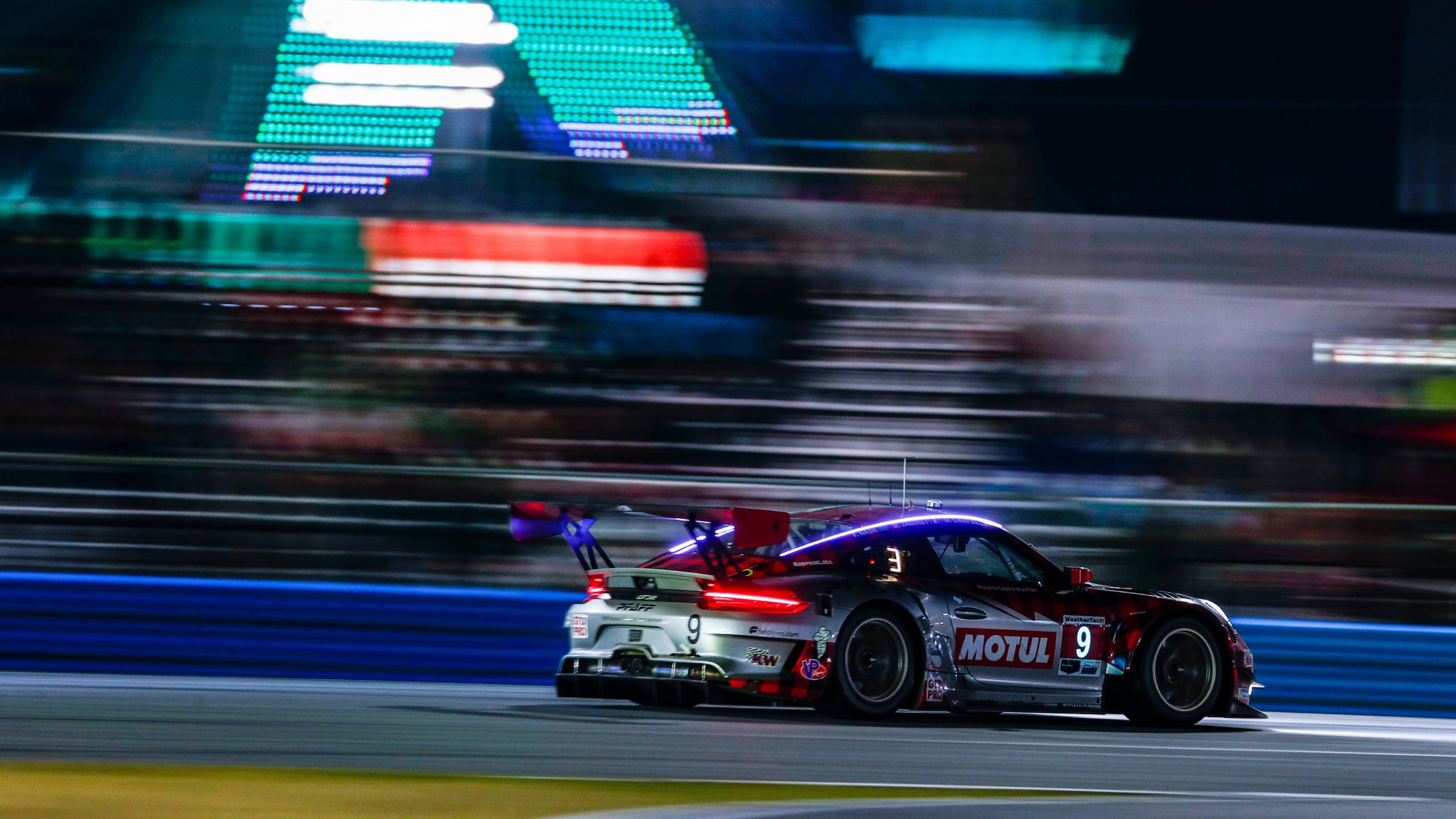 The two factory Porsche drivers waged an intense duel over the final two hours of the 60th running of North America’s most iconic endurance race. The action jumped off the chart in the closing five minutes, as Vanthoor’s constant pressure finally paid off and he gained the lead and held it for three intense laps leading to the white flag.

But Jaminet fought back. The Pfaff driver repeated Vanthoor’s pass around the International Horseshoe hairpin to regain the lead on the final lap before vigorously defending the position into the newly renamed Le Mans Chicane on the backstretch of the Daytona oval. The two Porsches negotiated the initial left-hander side-by-side before coming together as they entered the next right-hander. Both skirted the grass to the inside in a synchronized drift; Jaminet maintained control while Vanthoor skidded to a stop before quickly resuming.

By the time they reached the finish line of the 3.56-mile road course less than a minute later, Jaminet had a 2.185-second advantage over the No. 62 Risi Competizione Ferrari 488 GT3 driven by Alessandro Pier Guidi. Vanthoor claimed third place, 4.687 seconds behind the winner.

“This was crazy!” marveled Jaminet, a 37-year-old Frenchman who was a GT Le Mans class winner with Porsche last year at the Mobil 1 Twelve Hours of Sebring Presented by Advance Auto Parts and Motul Petit Le Mans. “It was difficult to realize what happened on the last lap – actually the last two hours. I was just driving for my life for these two hours.

“Even when he passed me, I thought, ‘I’m not going to give this thing,” Jaminet added. “It was too much hard work for one hour and 55 (minutes) to let it go in the last few laps. I had to give it everything and just go for it.”

Eight of the 13 GTD PRO entries led laps over the course of the 24 hours, and it wasn’t until the final quarter of the race that the Porsches truly separated themselves from the field.

It was a difficult GTD PRO debut for two-time defending GT Le Mans class champions Corvette Racing. The Nos. 3 and No. 4 Corvette C8.R GTDs encountered delays and finished sixth and 10th in class. Similarly, the first race for BMW Team RLL’s new M4 GT3 model was not trouble-free, resulting in a seventh-place finish for the No. 25 car and ninth place for the No. 24. Ryan Hardwick watched his Wright Motorsports Porsche race in last year’s Rolex 24 At Daytona from a hospital bed, sidelined with a concussion. The view was much more rewarding this year.

“It’s just so hard to win any race, let alone a 24-hour race,” Heylen said. “At the end with two or three hours to go, we had a good lead and I was sure in my mind that it wasn’t going to be that easy. We had good speed in the car and we just had to control our race and not worry about the GTD PRO cars. We’ve come here many times and tried, so to finally be on the top step is an amazing result.”

The No. 16 drivers methodically worked their way to the front from the 11th starting position in GTD. They didn’t lead until more than four hours into the 24-hour race. The car came alive overnight and controlled the late stages, leading 120 of the last 125 laps.

A critical strategy decision saw the No. 16 crew call the car in for its final pit stop with 52 minutes left in the race, just before a full-course caution for the No. 19 TR3 Lamborghini Huracán GT3 stopped on track. The No. 44 Aston Martin and No. 21 Ferrari had to pit under yellow and were unable to threaten the Porsche the rest of the way, much to the happiness of Hardwick.

“For me, it was a little bit of redemption coming back to this track and not only competing at a high level but ultimately winning,” Hardwick said. “Just blessed to be a part of a great team and exceptional driving by all of these guys, especially through the night and at the end of the race with Zach and Jan really pushing hard when the game was on.”

The next round of the IMSA WeatherTech SportsCar Championship is the Mobil 1 Twelve Hours of Sebring Presented by Advance Auto Parts, March 16-19 at Sebring International Raceway.