If you would have bet that Jake Gagne wouldn’t lead the 2022 MotoAmerica Medallia Superbike Championship until the sixth round (and 12th race) of the series, you’d be a bit richer today 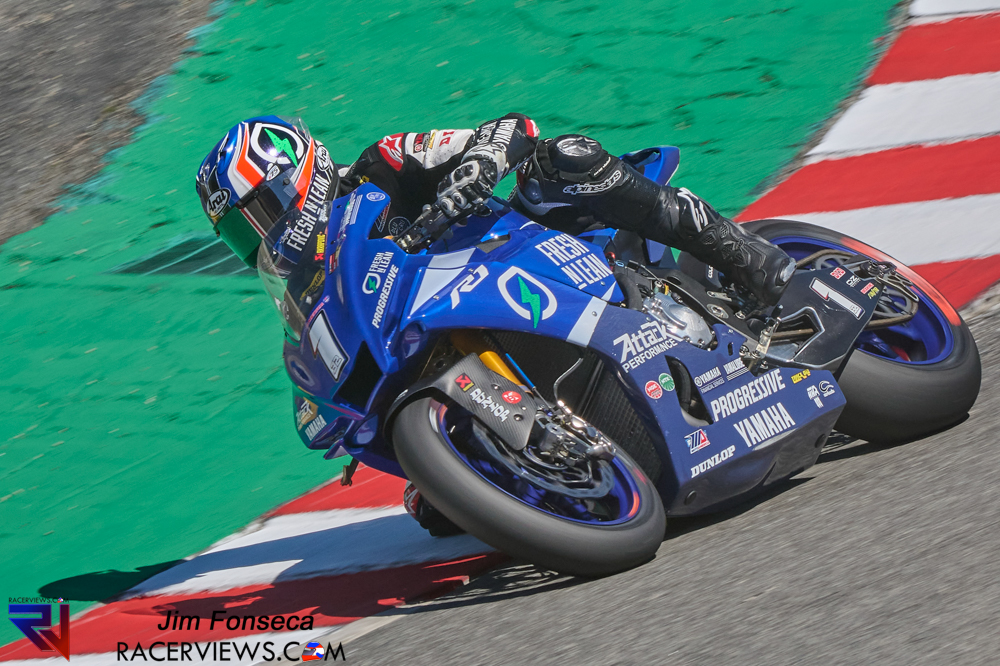 Fresh N Lean Progressive Yamaha Racing’s Gagne completed a sweep of the two Medallia Superbike races in the GEICO Motorcycle MotoAmerica Speedfest at Monterey on Sunday, the defending series champion taking over the lead of the 2022 title chase for the first time all season in the process.

Gagne nailed the holeshot from third on the front row, put his head down and gapped the field. From there it was just a matter of putting in quick laps, getting the lead to four seconds, then maintaining a fast pace to the finish. Gagne crossed the finish line after 20 laps of WeatherTech Raceway Laguna Seca. It was a signature Gagne race.

The win was Gagne’s fourth in a row and seventh this year as he’s kicked his season into high gear heading into the second half of the series. He now leads the championship by three points.

Although the podium was the same as in yesterday’s race one, the results were different with Warhorse HSBK Racing Ducati NYC’s Danilo Petrucci turning the tables on Gagne’s teammate Cameron Petersen in race two, the pair finishing second and third, respectively.

Although he went one better than yesterday, Petrucci’s runner-up finish wasn’t enough to keep Gagne at bay and the Yamaha man now leads the championship by three points, 215-212, marking the first time since the season began in Texas that Petrucci isn’t the championship leader.

For the second day in a row, Vision Wheel M4 ECSTAR Suzuki’s Superbike rookie Richie Escalante showed why he was picked by Suzuki to make the move to Superbike. Escalante ran third for a few laps before giving way to Petersen and Westby Racing Mathew Scholtz, his pace impressing both riders. When Scholtz crashed out of the race, Escalante inherited fourth and held it to the finish for the second straight day. He finished 17.9 seconds behind Gagne a day after finishing 17.5 seconds behind Gagne, but the race winner’s pace was faster in race two (28:17.534 to 28:19.887). An impressive weekend for the former MotoAmerica Supersport Champion.

With Scholtz a non-finisher, Tytlers Cycle Racing’s Hector Barbera improved by a position over yesterday’s sixth place with the Spaniard ending up fifth on Sunday. He was some eight seconds ahead of his teammate PJ Jacobsen at the finish.

Vision Wheel M4 ECSTAR Suzuki’s Kyle Wyman was eighth in his fill-in ride for the injured Jake Lewis, the New Yorker beating his brother Travis to the finish line by some four seconds.

Tytlers Cycle/RideHVMC Racing’s Corey Alexander was ninth, shadowing his teammate Travis Wyman to the end and losing out by just .247 of a second. ADR Motorsports’ David Anthony finished 10th after beating Disrupt Racing’s Hayden Gillim to the checkered flag.

So, with 12 races in the books, Gagne leads Petrucci by three points, 215-212. Petersen’s third-place finish combined with Scholtz’s non-finish swaps the two South Africans with Petersen now third with 175 points to Scholtz’s 170. Barbera is fifth with 122 points.