Mercedes-AMG is celebrating its first TotalEnergies 24 Hours of Spa victory since 2013 after AMG Team Akkodis ASP won an enthralling 74th edition of the Belgian endurance classic, which was staged in front of a packed house of spectators and in perfect weather conditions from start to finish.

The German marque finished one-two at the biggest GT race in the world as the triumphant Akkodis car was followed across the line by its fellow AMG-aligned entry from the GetSpeed squad. Iron Lynx finished third with the #71 Ferrari, a fine result following its overall win 12 months ago. 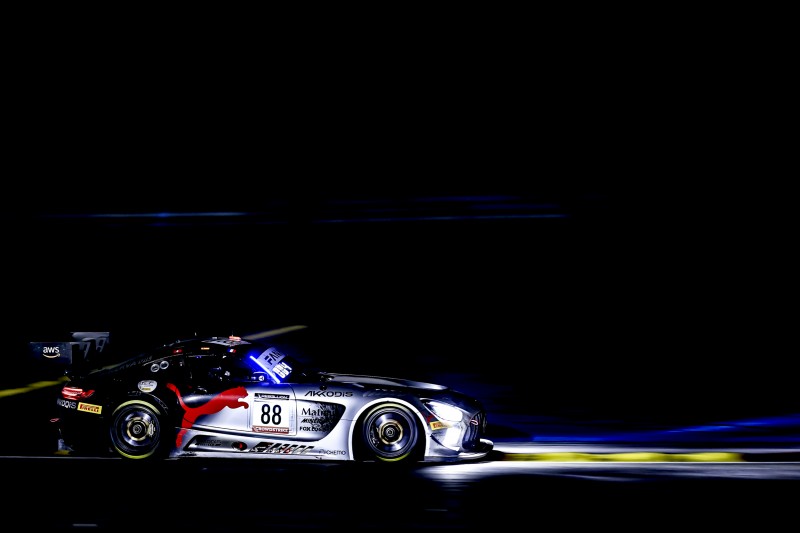 Victory in the race had become something of an obsession for Jerome Policand and his Akkodis ASP crew, particularly after falling short from pole position in 2020 and 2021. Such was Policand’s desire to lift the winners’ trophy, he assembled the all-star line-up of Raffaele Marciello, Jules Gounon and Dani Juncadella, one of the strongest crews in global GT racing, to bolster the Spa assault.

The #88 Mercedes-AMG started the race from pole yet again but was relegated to second almost immediately as Klaus Bachler blasted past in the #54 Dinamic Motorsport Porsche. The Austrian driver remained out front for the opening stint, though this team’s race would ultimately end during the night.

The Akkodis ASP car was at the sharp end throughout the first half of proceedings, running third at the six and 12-hour marks to bank important championship points. Unlike recent editions, the car continued to circulate without significant problems and was still firmly in contention as the sun rose over Spa-Francorchamps. 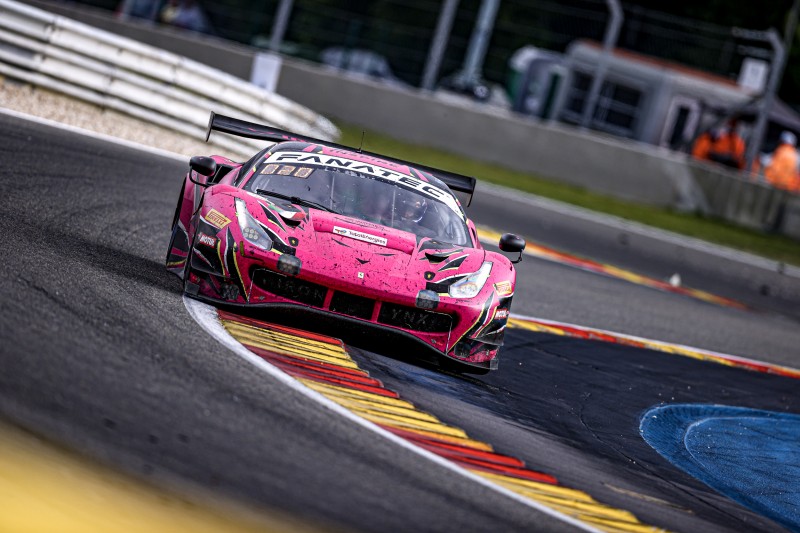 The #98 ROWE Racing BMW led at both points-paying junctures. The crew of Nick Catsburg, Augusto Farfus and Nick Yelloly moved to the front through strategy and then displayed impressive pace at the head of the field. Indeed, the new M4 GT3 appeared to be the fastest car on the track in cold conditions, bringing sister #50 car into contention as well.

The #47 KCMG Porsche had also emerged as a serious contender for the win by the morning, despite starting from the back of the grid following a brake issue in qualifying. The Hong Kong squad’s remarkable rise gathered pace as the morning progressed, with Nick Tandy putting a move on Davide Rigon (#71 Iron Lynx Ferrari) at around 7am to capture the lead.

At a phase of the race where the contenders usually drop away and a handful of clear favourites emerge, this year’s edition grew more complicated as the morning progressed. The #98 BMW was still out front at the 16-hour mark after Yelloly pressured Marciello into a mistake and snatched the advantage on the run to Blanchimont.

The #88 Akkodis ASP car encountered its only serious drama during the 20th hour when it was spun around at the Bus Stop by the #93 Sky Tempesta Racing Mercedes-AMG driven by Jonathan Hui. The latter clipped Gounon while attempting to duck into the pits, later receiving a penalty for the error.

At this stage the contest was still impossible to call, with varying pit strategies ensuring that there was no obvious leader. As well as the #88 Mercedes-AMG, the #47 Porsche, the #98 BMW, the #71 Ferrari and the #95 Beechdean AMR Aston Martin were also part of the lead pack.

The latter was involved in one of the most dramatic moments of the race after Gounon caught Nicki Thiim in the #95 Aston Martin and went side-by-side through Eau Rouge. The Frenchman appeared to have edged ahead into Raidillon, but Thiim kept his foot in and made minor contact with the side of the Mercedes-AMG, sending the Aston pirouetting across the run-off and back across the track. After stepping out of the car, the Dane said that at such a late stage in the race he simply could not lift.

As one contender departed another entered. AMG Team GetSpeed had run quietly, but by optimising its maximum stint lengths the #2 Mercedes-AMG became a serious challenger for the win. With the event moving into its final two hours the contest appeared to be narrowing to a three-car battle, but there was heartbreak for the ROWE squad when Nick Yelloly picked up a puncture. The British driver limped back to the pits and, while the car was able to continue, its hopes of victory had been dashed.

And then there were two. But having moved into the lead battle through strategy, the #2 AMG Team GetSpeed car did not really have the pace to fight Akkodis ASP. On fresher tyres, Marciello cruised up on finishing driver Luca Stolz and made an attempt into La Source. The pair went side by side, but the GetSpeed car squeezed the #88 and Marciello bounced across the gravel, an incident that Stolz later apologised for.

Despite losing significant time the Akkodis car was able to get another run on the very next lap. There was no drama this time, with the Swiss driver taking the position. Pit sequence meant that the #55 AMG Team GruppeM led until 30 minutes from the end, but the Akkodis crew had done enough to put the result beyond doubt. Once the #55 had taken its stop Marciello was clear to the finish, ultimately taking the chequered flag by 31 seconds.

AMG Team GetSpeed made it a Mercedes-AMG one-two, while the Iron Lynx squad completed the podium with its #71 crew of Davide Rigon, Antonio Fuoco and Daniel Serra. The fastest car in the build-up to the main event, the car was never a serious contender for the win after a drive-through penalty for a safety car infringement during the morning. Nevertheless, it had the pace to stay among the leading group, while Fuoco could unleash a little extra speed during the closing stages as Maro Engel chased him down in the #55 Mercedes-AMG.

Engel had passed Dan Harper in the #50 ROWE Racing BMW, which finished fifth to give the junior line-up a superb result in its maiden run at Spa. The sister BMW was next, followed by the #47 KCMG Porsche and the #38 JOTA McLaren, which once again ran with metronomic pace to earn a strong result in the Ardennes. The #51 Iron Lynx Ferrari and the #95 Beechdean AMR Aston Martin completed the top-10. 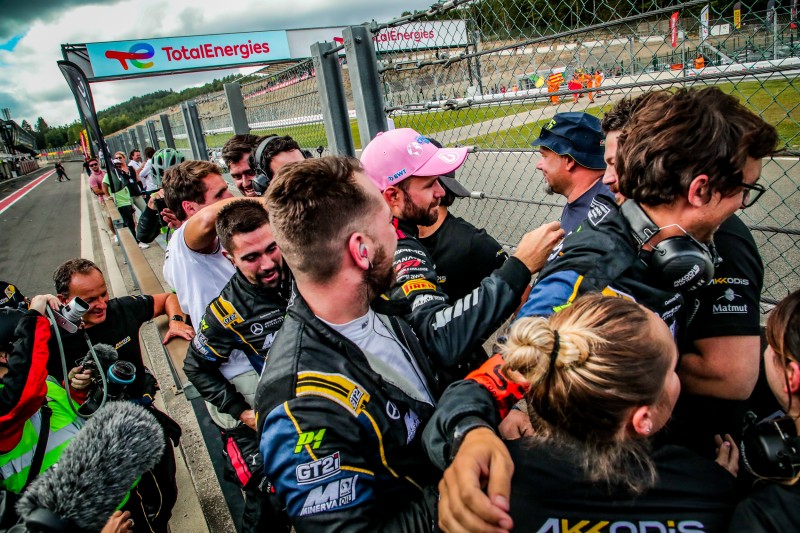 Silver Cup honours went to the #30 Team WRT Audi after a tough contest that saw a number of contenders fall by the wayside. Al Manar Racing by HRT dominated the early stages, running as high as sixth overall with Fabian Schiller at the wheel of its #777 Mercedes-AMG, but was eliminated by a crash at the start of a full-course yellow period.

Tresor by Car Collection was the next to take the lead, but its #11 Audi found itself in the barriers just before the seven-hour mark. Haupt Racing Team assumed control through the night, but its Mercedes-AMG expired during the morning. This made the race into a battle between the #30 Team WRT Audi, the #99 Attempto Racing Audi and the #14 Emil Frey Racing Lamborghini.

The latter was a dark horse due to its off-sequence pit strategy, but its chances were ended by a dramatic puncture with 45 minutes left on the clock. This left the two Audi squads to run to the finish, the Team WRT crew of Thomas Neubauer, Benji Goethe and Jean-Baptiste Simmenauer taking a deserved class win. After handling the closing stages, Neubauer was overcome with emotion after the chequered flag.

Iron Dames secured a resounding and immensely popular Gold Cup win. The first all-female crew of the GT era ran without encountering major problems during the early stages and then cycled to the front of the class order during the night. The #83 Ferrari held the lead at 11 hours and was not challenged thereafter, holding a two-lap advantage throughout the second half of the race.

As such Rahel Frey, Sarah Bovy, Michelle Gatting and Doriane Pin could effectively cruise to the end, with only technical problems or complacency able to stop them. They suffered from neither, taking the chequered flag three laps clear of the competition.

The battle for Pro-Am honours began in relatively calm fashion, but there was plenty of drama on Sunday morning. The #52 AF Corse Ferrari emerged at the head of the pack, clinching the team’s sixth class win since 2011 and a third for stalwart drivers Louis Machiels and Andrea Bertolini. The #24 Herberth Motorsport Porsche led early on, making significant progress with Belgian ace Alessio Picariello at the wheel, but disaster struck during the 18th hour.

When the race went back to green after a safety car the #24 was amid a gaggle of cars, including the Pro class #19 Emil Frey Racing Lamborghini. Arthur Rougier went up the inside of Niki Leutwiler and there was contact between the pair, sending the Porsche spinning into the gravel. It was removed by a safety vehicle, but retired soon after when its left-rear wheel became detached. 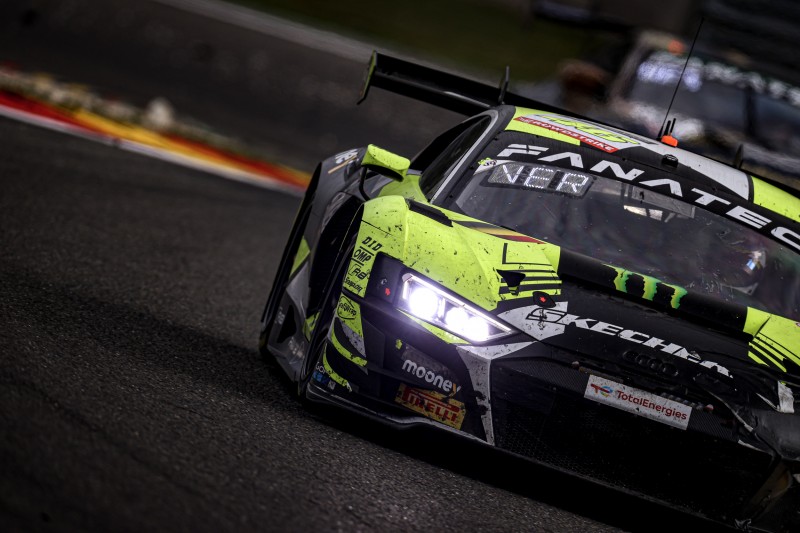 This promoted Garage 59 back to top spot, but there was another change shortly after when Andrea Bertolini made a pass on Miguel Ramos, elevating the #52 AF Corse Ferrari to the class lead. The race was finely poised until contact between the Garage 59 machine and the #93 Sky Tempesta Racing Ferrari fired Ramos into the barrier, destroying the front end of the McLaren and necessitating a lengthy repair.

This gave AF Corse a three-lap advantage at the head of the field and, like fellow Ferrari squad Iron Dames, they made the most of it. Machiels and Bertolini were joined in the #52 Ferrari by Stefano Costantini and Alessio Rovera, the latter recording the outright fastest lap of the race and setting a new GT3 era record in the process. 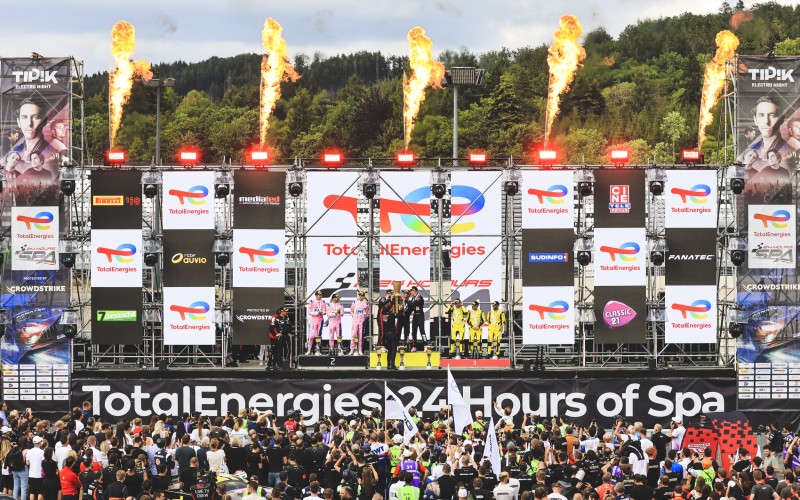 The Bronze Cup battle was proof that you only need two cars to make a motor race. The #20 SPS automotive performance Mercedes-AMG and the #35 Walkenhorst Motorsport BMW remained together for the majority of the 24 Hours, often split by only a few seconds and swapping places on a number of occasions. Ultimately it was a small mistake the decided the race: an off-track excursion damaged the floor of the BMW, sending it into the pits for repairs. This allowed the #20 Mercedes-AMG to capture the win with its crew of George Kurtz, Reema Juffali, Valentin Pierburg and Tim Müller.

With the official attendance confirmed at 73,000 spectators, the 2022 edition was the TotalEnergies 24 Hours of Spa back at its very best. The parade, Saturday night’s music concert and a bustling paddock atmosphere ensured a special week in the Ardennes. A one-two finish in the marquee race, almost a decade after its last triumph, was an equally spectacular comeback for Mercedes-AMG.