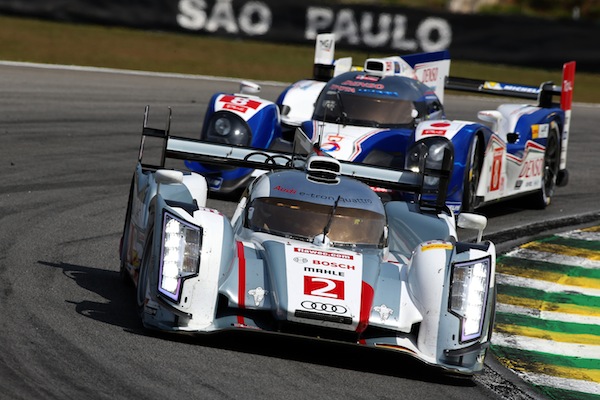 The FIA World Endurance Championship was back underway over the weekend with the Six Hours of Sao Paulo. It was another great sportscar event and we took to Twitter to find out what you thought…

Has there ever been a cooler pre-race media shoot?

You can’t argue that this field is not high quality. Perhaps the best there is in 2013 motorsport

In other news, AF Corse didn’t look this good by the end of the weekend

It looked more like this by the end of the weekend
httpv://youtu.be/6ST5GPwS1PA

There was also some shenanigans with wheels
httpv://youtu.be/TVyUWBF7z08

We couldn’t find a picture, so here is an Aston

The Rebellion squad had a great weekend, finishing third

Though it was a great weekend for Audi. Toyota fell by the way and they were left unchallenged

Our two Audi R18 e-tron quattro qualified on the first row of the grid for Sunday's @FIAWEC in Brazil # WEC #R18 pic.twitter.com/wcN0TvoNcC

Toyota were fast but this happened. Though kudos for trying to get it back on track

The LMP2 battle was also tight, with OAK Racing having another solid run. It must be difficult for codrivers waiting at the end of the race…what a pretty face!

Congrats to the podium getters – here is the LMP1 field

And a word on the future

I spoke to quite a few @FIAWEC teams interested in coming over to Daytona and Sebring next year, but all waiting on regs to be released.

I have it under good authority we will see both the #USCR and @FIAWEC 2014 schedules come out this month. #TheFuture

RacerViews was established in 2011 and with the aim of delivering a new web experience to motorsport fans. We bring exclusive interviews and photos from motorsports finest drivers of yesterday, today and tomorrow. Our team has over 30 years of experience in the motorsport field. With a heavy presence on Facebook, Twitter and iTunes where we have over 2800 followers, our mission to bring exclusive content is in safe hands. We have partnered with motorsport teams like Stig Richards Motorsport, One of a Kind Motorsport, Dark Horse Racing and MRT Performance in order to give you the best exclusive motorsport coverage.