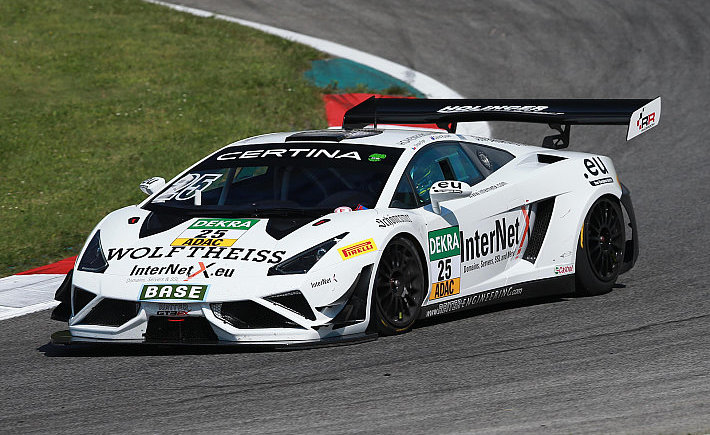 Lamborghini made an impressive comeback to the Super Sports Car League with a victory at the Red Bull Ring in the south-east of Austria for David Russell (33, AUS) and Tomas Enge (38, CZE) in a Gallardo R-EX entered by Reiter Engineering. In conditions of extreme heat, Enge and his new team-mate from Australia claimed a first race win in the ADAC GT Masters for a Lamborghini since the equivalent fixture at the Red Bull Ring in 2011. The victory also ended a four-race winning streak at the track in Austria for Daniel Keilwitz (25, GER) in his Callaway Competition Corvette by a margin of 0.944 seconds. Keilwitz and co-driver Andreas Wirth (30, GER) finished in second place ahead of Luca Ludwig (26, GER) and Sebastian Asch (29, GER) in a Team Zakspeed Mercedes-Benz SLS AMG, for whom a third podium of the season was enough to take them to the top of the championship standings.

“On the final laps, the pressure from the Corvette was intense, but I was able to control the gap,” said Ex-Formula 1 driver Enge with evident delight after his first ADAC GT Masters win. “We took a big risk switching from the Chevrolet Camaro to the Lamborghini. We also brought in a fast driver from Australia, David Russell, who didn’t know anything about the series, the track or the car. But our massive confidence in the car and the driver has been vindicated.”

Nissan dominates first half of race

The star turn of the first stint contested in extremely high temperatures of over 30°C was the Nissan GT-R. On the very first corner, Dominic Jöst (36, GER) in his MRS GT Racing Nissan drew past pole-sitter Philipp Eng (24, A) in the GW IT Racing Team Schütz Motorsport Porsche to take a lead which he then held comfortably until the halfway mark. Meanwhile, Eng was forced to concede second place to Russell in the Lamborghini, who then pursued the leading Nissan to the pit stop.

The Lamborghini duo managed to complete their changeover three seconds faster, which brought Enge out ahead of the Nissan. But 20 minutes before the end of the race, there was huge disappointment in the Nissan camp as Florian Scholze (42, GER) limped home to the pits after a recurrence of the electronics problem that had dogged the team all weekend. Corvette man Keilwitz inherited second place and mounted a furious pursuit of race leader Enge. But ultimately, he was forced to concede defeat by less than one second. After a good start and an error-free race, Asch and Ludwig finished third, which was enough to see them take over at the top of the championship table.

“My start was not the best, but it was good enough to immediately get us into the battle for the lead,” said Russell after becoming the first Australian to win an ADAC GT Masters race. “The Nissan was very strong in the first stint, but I was able to stay in touch. Tomas then did a great job for the remainder of the race. My first race in this series and my first win – I couldn’t be happier.”

“The result is far better than expected,” said an exhilarated Enge. “We had a great car, and our hard work of recent months has paid off here. So far, we have not allowed ourselves to make the slightest mistake this weekend. This performance by David is incredible, because he has never been here before. It’s a challenging track anyway and the field is massively competitive with 18 cars within one second of each other. Tomorrow, we aim to be on the podium again.” 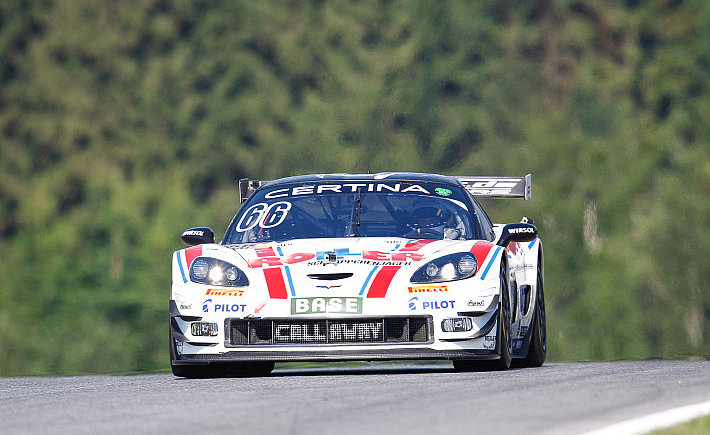 Lamborghini put the rest of ADAC GT Masters field in the shade at the Red Bull Ring in Austria. Adrian Zaugg (28) from South Africa and Mirko Bortolotti (25) from Trentino in northern Italy steered the new Lamborghini Huracán to a maiden race win on Sunday. Success was particularly sweet for the Grasser Racing team, who are based in nearby Knittelfeld, because this was the first time they have won their home race at the Red Bull Ring. It was a one-two victory for Lamborghini, with the new Gallardo R-EX driven by Saturday’s winners David Russell (33, AUS) and Tomas Enge (38, CZ) and entered by Reiter Engineering finishing second. Because the victorious Huracán was competing in a guest role and therefore not eligible for points, Russell and Enge go home with a maximum yield of 50 points from their outright win on Saturday and second place today. The Austrian pairing of Philip Eng (24) and local favourite Klaus Bachler (23) in a GW IT Racing Team Schütz Motorsport Porsche 911 claimed the third podium spot. “This is the fourth successive year we have been trying to win our home race in the ADAC GT Masters, and now the dream has come true,” beamed Team Principal Gottfried Grasser. “This ADAC GT Masters weekend has given us so much fun, I hope we can come back again this year.”

Held in scorching temperatures of 30°C, Sunday’s race on the circuit near Spielberg in the southeast of Austria turned on a thrilling battle between Corvette and Lamborghini. Daniel Keilwitz (25) in the Callaway Competition Corvette pulled ahead of pole-sitter Enge in the Lamborghini on the entry to Turn 2 and took a first stint lead. Enge then had to let Bortolotti through in an internal duel with the other Lamborghini. The Italian, who now lives in Vienna, immediately put race leader Keilwitz under pressure and reduced the gap to two seconds. After the driver change, Andreas Wirth (30) and Zaugg continued the duel for the lead throughout the second half of the race. The luminous green Lamborghini increased the pressure on the Corvette and eventually seized the lead five laps before the end when Wirth was forced to pit with strong vibration on the rear axle, thereby losing all chance not only of victory but even a points finish. This cleared the way for a Lamborghini one-two of Huracán followed home by Gallardo.

“I don’t know exactly what happened to the Corvette,” said Adrian Zaugg. “I could see that he had a problem two corners before I overtook him, so I made the most of the chance. This was the first victory for the new Huracán in a sprint race. Lamborghini can be very proud. I’m particularly pleased that we were able to give the Grasser team a victory in their home race.”

“We pushed really hard and got everything we could out of the car, as I’m sure you all saw,” added Mirko Bortolotti. “The key to our win was getting past Enge’s Lamborghini with a good overtaking manoeuvre, after which I was able to put the leading Corvette under pressure. We were constantly getting a bit faster than the Corvette, and Adrian then put in a great stint to clinch the victory. I am delighted for Lamborghini and the fans; we’ve generated a fabulous atmosphere here and delivered a great race.”