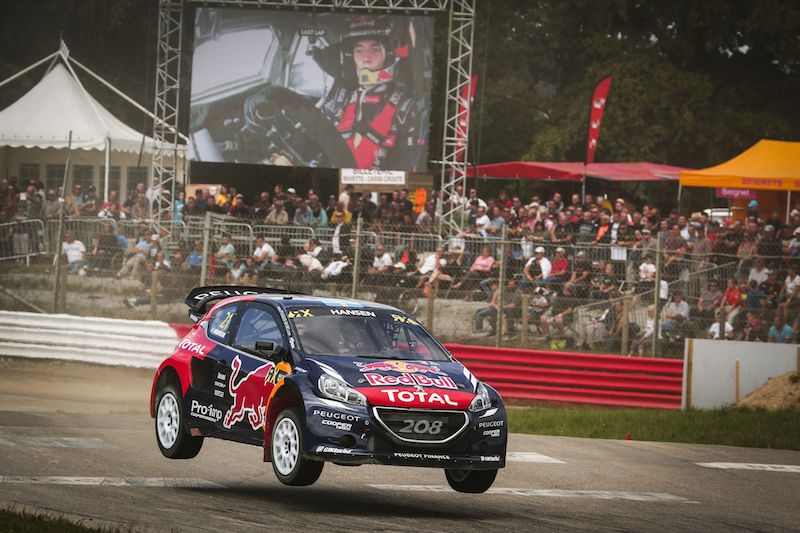 Sweden’s Timmy Hansen won the Bretagne World RX of France in style by triumphing at the ninth round of the FIA World Rallycross Championship presented by Monster Energy at home for Peugeot.  It is the second event in a row that Hansen has won in his Peugeot 208 WRX Supercar and the result sees the squad extend its lead at the top of the Teams’ Championship. Points leader Petter Solberg clinched the runner-up spot while Frenchman Jean-Baptiste Dubourg finished third in front of an elated home crowd.

A record crowd of 75,000 fans attended this weekend’s Loheac RX as Hansen took top qualifier for the third event in a row and scooped the maximum 16 points available at Intermediate Classification. Solberg continues to lead the World RX Drivers’ Championship, 37 points ahead of Hansen. Third in the overall standings is Team Volkswagen Sweden’s Johan Kristoffersson, who finished fourth this weekend after another impressive drive in his VW Polo RX Supercar.

“If there is one place I wanted to win it’s Loheac – the home of Peugeot,” said race winner Hansen, who also wins the Monster Energy Super Charge Award for beating the other drivers to the first corner of today’s final.  “It feels so good to take this win – the fans have given me so much support this weekend and it’s amazing to be able to give something back to them.  The heats were tough – we had a strategy to save the tyres for the semi-finals and it felt so good to get through all four heats with the maximum 16 points and pole position. I pushed in the semi-finals with the new tyres. For the final, I had six clear laps and the team pushed me so hard on the radio, which kept me going right to the end.  This victory is for all the supporters this weekend and to everyone who believed in Team Peugeot-Hansen.”

Solberg was pleased with second place as the Norwegian explained he had a clear strategy going into the weekend: “We had a plan this weekend to get as many points as possible during the heats – this is why we changed tyres for the third heat and didn’t save them for the semis,” explained the SDRX driver. “We’ve worked out that we need an average of 21 points at each race to keep ahead in the standings and this has been my focus.  We’ve had some problems such as the gearbox on day one but I’m very happy with our performance and second place is brilliant for the Championship.  Timmy was fast in the final – I knew it would be hard to catch him on new tyres but I want to say that I’m very impressed with Jean-Baptiste [Dubourg] – he is a proper talent and should be in the World Championship next year for sure.”

Euro RX front-runner Dubourg finished third driving his fellow countryman Davy Jeanney’s former Citroen C4 RX Supercar. He said: “This is a dream come true and a gift before Christmas.  The semi-final was always the goal but when I made it to the final, I thought to myself that anything could happen and that I might be in with a chance of top three. A podium in an FIA World Championship – wow! It is just unbelievable.  I’m going to enjoy celebrating with my team tonight, this victory is for them – I want to thank them for everything.”

Rounding out the top five at Loheac RX was two-time DTM Champion Mattias Ekstrom who had a good run of form in his Audi S1 EKS RX quattro. Ekstrom, whose team-mate Anton Marklund made the semi-finals for the second event in a row, was knocked out of podium contention when he spun on turn one of the final and broke his car’s driveshaft.  Robin Larsson was sixth, the Swede failing to finish the final after suspected gearbox problems in his Audi A1 Supercar.

Elsewhere, it was a tough weekend for Solberg’s team-mate Liam Doran who showed good pace in his Citroen DS3 RX Supercar but was deprived a semi-final position after breaking his car’s suspension in two of the heats. “My luck has got to change at some point – we’ve proved we’ve got the pace,” explained the Englishman.  “The car is working well enough. We’ve got four chances left so we need to keep trying.”

In the Super1600 category, where there was a total of 30 cars entered, it was Denmark’s Ulrik Linnemann who took the overall victory and also his second win of the season. Frenchman Andrea Dubourg finished second much to the delight of the home crowd, while Russia’s Timur Shigabutdinov secured the third podium spot.  Linnemann’s win this weekend sees the Dane catapulted to second in the S1600 driver standings – nine points adrift of series leader, Janis Baumanis. There are just two rounds remaining in this year’s S1600 category: Barcelona and Italy. 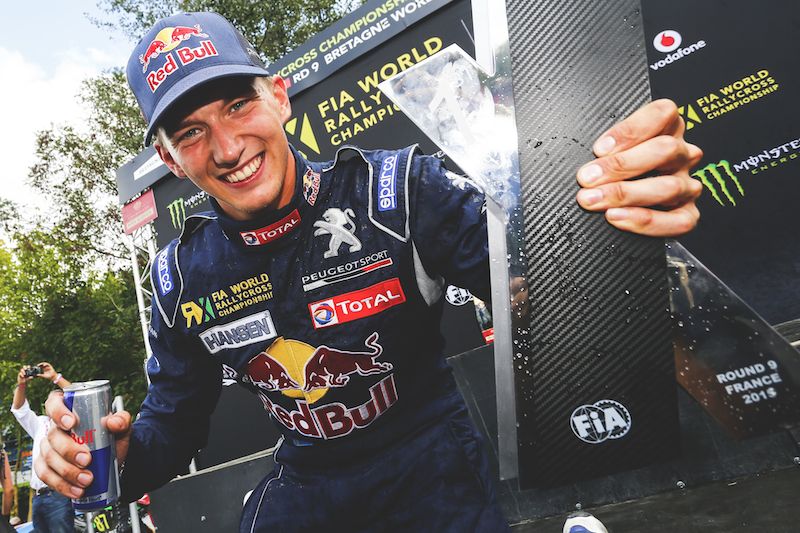 Paul Bellamy, World RX Managing Director for IMG, commented: “Once again Loheac has delivered a phenomenal event and I would like to congratulate the organisers for their tremendous efforts in making this year’s Loheac RX more popular than ever before with attendance figures reaching a staggering 75,000.  There’s no denying that Loheac RX deserves a spot on the World RX calendar with its sell-out crowd and fantastic race action. Congratulations to Timmy who took the victory, he drove a mature race and thoroughly deserves his second win of the season for Peugeot. It was also great to see a Frenchman in today’s final – the atmosphere was palpable as Jean-Baptiste received a standing ovation from the fans for his podium position. Now it’s onto Barcelona where the season is expected to reach fever pitch as the drivers scramble for crucial points in this year’s Drivers’ and Teams’ Championship.”

The inaugural World RX of Barcelona which will be staged at the famous F1 circuit from 18-20 September. World RX, Euro RX, S1600 and the supporting RX Lites Cup will battle it out at the tenth round of the Championship.

For the full results from World RX of France, please visit www.fiaworldrallycross.com/results