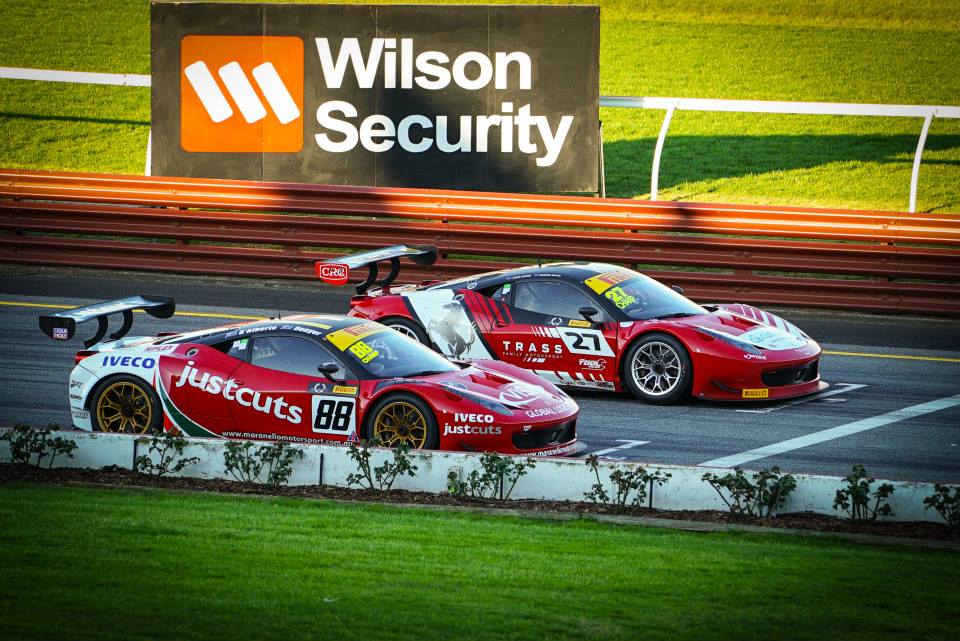 It is all to play for in the Australian GT Championship with the JAMEC Pem Audi and the Swirk Audi squads. They had contrasting weekends at Sandown…

From Australian GT PR
With the championship on the line in both the outright GT3 and the Trophy Class categories heading into the penultimate round of the Australian GT Championship presented by Pirelli in Melbourne, the six-car Audi Sport customer racing Australia team knew they were at the turning point in the season.
In the outright category, three-time 2015 race winner Nathan Antunes held a narrow lead over reigning Nurburgring 24-Hour team-mate Christopher Mies, himself a two-time winner in 2015. The pair were separated by just 11-points coming in, and after qualifying, they knew their work would be cut out for them with the pace of their opponents, and the long pit stop penalties which both teams would incur.
Ultimately though, despite the challenges and the speed of their rivals, Mies and co-driver Ryan Millier took a third and a win to claim the round victory and move ahead in the points, whilst Antunes – who was Audi’s top qualifier – had a tough weekend by contrast falling back to second in the points heading into the final round of the season in New Zealand in mid-November.
They weren’t the only ones battling for a championship – in Trophy Class, for older-specification FIA-GT3 cars – team-mates Greg Taylor and Barton Mawer and stablemate Mark Griffith have been locked in a battle for the second tier championship since the opening round in Adelaide, and Melbourne would prove no different, although both teams lost a little ground to title rival Theo Koundouris who claimed his second round win of the year. 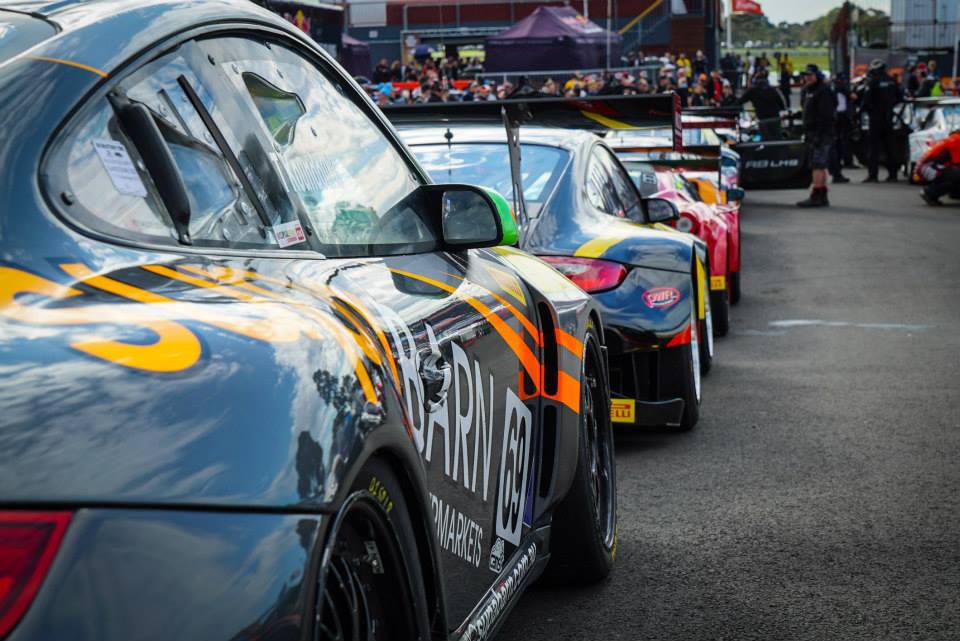 With two long drag-strip style straights, the 5.2-litre V10 Audis were always going to face a tough battle against the notoriously quick Ferraris, yet despite the challenge, Antunes managed to qualify on the second row behind the two 458s, with Mies immediately behind on row three on his debut at the Melbourne circuit.
In the battle for Trophy Class honours, the Audis of Taylor/Mawer and Griffith were always going to have a tough time against the Porsche GT3-Cup S of title rival Theo Koundouris, the Porsche driver though unable to combat the pace of Mawer, with the Adina Partment Hotels Audi claiming pole, with Mark Griffith fifth, and series rookie Rob Smith an impressive sixth in just his second Australian GT event.

Antunes was on a charge off the line, the points leader monstering the tail of the two leading Ferraris through the opening laps before ultimately inheriting the lead as the two leaders pulled in for their compulsory stops.
Antunes then put his head down and charged, opening up a sizeable gap to head for the pits just prior to the compulsory pit stop [CPS] window closing, but on his last flying lap his weekend came unstuck at Dandenong Road corner trying to get around a slower car.
“Everything was falling into place, and I was pushing hard, but caught the Ferrari on the racing line so I wasn’t on my optimum line and clipped the inside kerb on the way in which threw the ABS and ASR out a bit because I didn’t brake any later than the previous lap, but couldn’t pull it up and went straight on into the gravel trap.
“By the time I got out I’d lost all the advantage I’d built and hit the pits straight away, rejoining in tenth and with lots of work to do. I was pretty disappointed, but there wasn’t much I could have done, so I had to wear it and just concentrate on getting a result.”
With Millier starting the #74 car and completing a solid opening stint, he hit pit lane in P5 for a lengthy stop to hand over to Mies, the German leaving the pits in 21st, but quickly back up to sixth as one of the fastest cars on the circuit.
He caught and passed former champion Klark Quinn for position, then jumped another spot to cross the line fourth, but a pit-lane infringement by the Trass Family Ferrari saw the #74 Jamec-Pem Audi promoted to third overall, in the process handing Mies back the points lead. 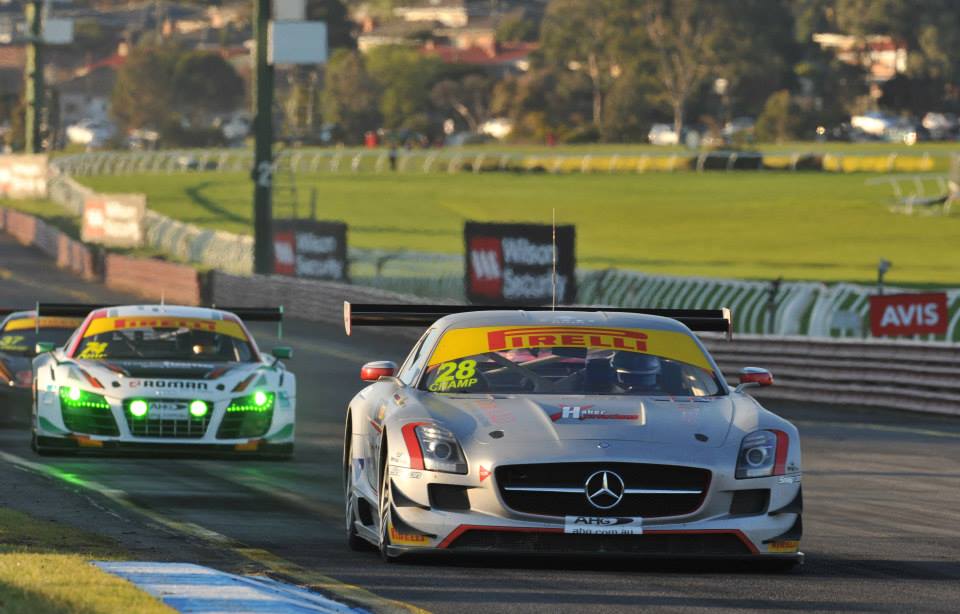 Antunes recovered to finish eighth, but like his title rival, was also handed an advantage to be classified seventh, with Steve McLaughlan making it three R8 ultras in the top ten after a solid run through to tenth.
After qualifying strongly, the Adina Apartment Hotels R8 LMS of Greg Taylor and Barton Mawer was looking good for a solid run in the opening race and an extension to their championship points lead, but all of that came unstuck on the run to the line at the start..
“I got a bit excited,” Mawer admitted of his stunning race start. “I grabbed the outside line once we got the start and charged past a number of the leaders, but I’d jumped too early and as a result, I was given a drive through penalty which was fair enough. I managed to get back into the lead ahead of the CPS and handed Greg the car. He did a great job, but he came out in the middle of the pack, had a spin, hit one of the Lamborghinis and spun again, and generally had a tough run of it, but his pace was good and we recovered for fourth in class, right behind Mark Griffith.”
Griffith’s result handed the Queenslander a third place finish, a good recovery after a tough day in the office.
“I’m still learning the Audi, and it caught me a couple of times on the ABS, the car does things differently to what I’m used to, so as a result I had a couple of spins,” he explained. “I still managed a third, so more important points, but I need a couple of good results over the next few races because the Koundouris Porsche is starting to close in.”
Rob Smith rounded out the six for Audi, with a sixth placed finish in Trophy Class and more valuable laps in challenging conditions against some of the best GT drivers in the region doing battle for the 2015 title. 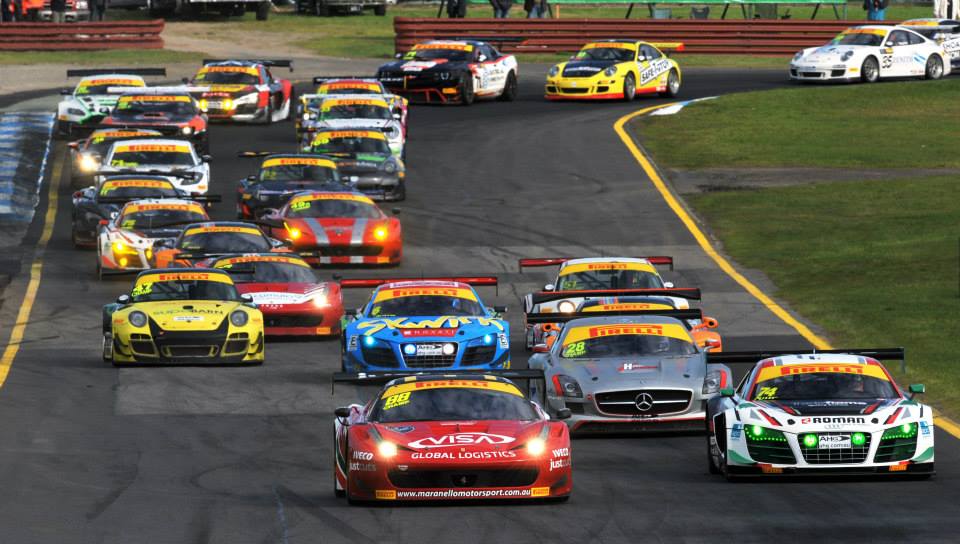 An early start saw the AGT field line up for the first race of the day with Mies starting from the second row and Antunes not far behind. The two Audi drivers knew their best chance to attack was off the start, Mies through to second under the rear wing of the leading Ferrari, and Antunes to fourth all over the back of the Haber Mercedes.
Behind them Greg Taylor’s strong start in Trophy Class was thwarted by contact from the second of the SLS Mercedes, with a tap on the opening lap into turn four dropping him to rear of field.
Ultimately Mies fell to the Mercedes and the second Ferrari, falling back into the clutches of title-rival Antunes as the CPS window approached.
Sadly for Mark Griffith who was hanging onto a comfortable top three in Trophy Class, a quick spin again at turn one dropped him off the tail of the class leaders, forcing a recovery in the closing stages of the race.
Mies hit the pits relatively early to give team-mate Ryan Millier a chance to gain some valuable ground ahead of the pack stopping for their CPS, whilst Antunes once more stayed out to gain some advantage on a clearing circuit.
As he had done in race one, he hit the lead before his stop, but frustratingly for the popular Sydney-sider, he hit pit lane too fast, in the process earning himself a drive-through penalty which dropped him back to 13th place with 15-minutes remaining.
After the CPS window had closed it was Millier who was leading the Audi charge, just as he had done in Sydney, although he had one more hurdle to face ahead of a second win, category owner Tony Quinn in the McLaren 650S.
Millier put his head down and charged straight out of the pits, and quickly closed onto the tail of the McLaren, taking him in a drag race down the back straight. 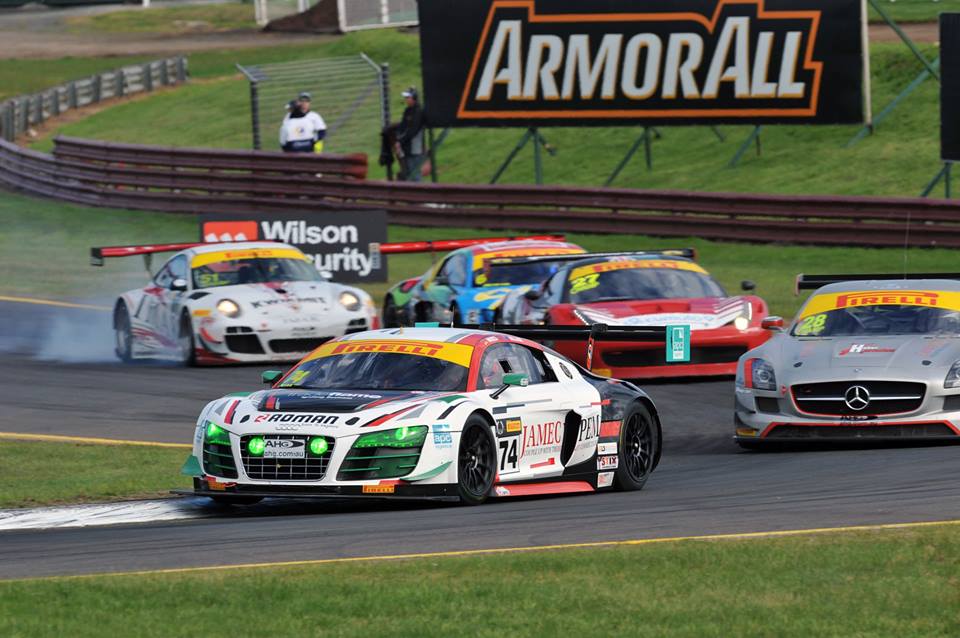 Behind him Jamec-Pem team-mate Steve McLaughlan emerged from his CPS in the mix with the two pace-setting Ferraris, the former Trophy Class champion going head-to-head with the two faster cars, losing little across a number of laps before ultimately coming into contact with former V8 Supercar full-timer D’Alberto, which turned the #75 car around.
“I always run stronger in the races, and Sandown is my home circuit, so I was pretty comfortable amongst the Ferraris,” McLaughlan admitted post-race. “The team got me out after the CPS right in the thick of the action with the lead group, and I was holding my own before Tony D’Alberto turned me around coming out of turn 11 not far from the finish.” Sadly for the Jamec-Pem team-boss, the result dropped him back down the order to 15th at the flag.
At flag-fall though it was all Millier, the local driver withstanding the oncoming attack from the Haber SLS to claim his second win from four starts, and his second round win in a row to help Mies to an extension of his points lead, whilst Antunes recovered for ninth.
Barton Mawer turned in another exceptional drive in the closing stages of the race to move the #38 Adina Apartments Audi R8 LMS back into the lead of Trophy Class, earning the team third for the round, with McLaughlan and Griffith not too far behind, Griffith lamenting the first round result in more than two seasons of Australian GT where he wasn’t on the podium.
Rob Smith rounded out the field with another strong performance in the Southern Star Developments Audi R8 LMS, claiming sixth in class in the process.
For the Audi Sport customer racing Australia team, it’s now onto New Zealand for the closing round of the season at Highlands Motorsport Park in Cromwell, on the South Island, although they must wait two months (13-15 November) until their chance to stake their claim on the Championship and Trophy Class titles for 2015.