TRIPLE EIGHT Racing has delivered a one-two punch in practice ahead of the Liqui-Moly Bathurst 12 Hour this weekend at Mount Panorama. 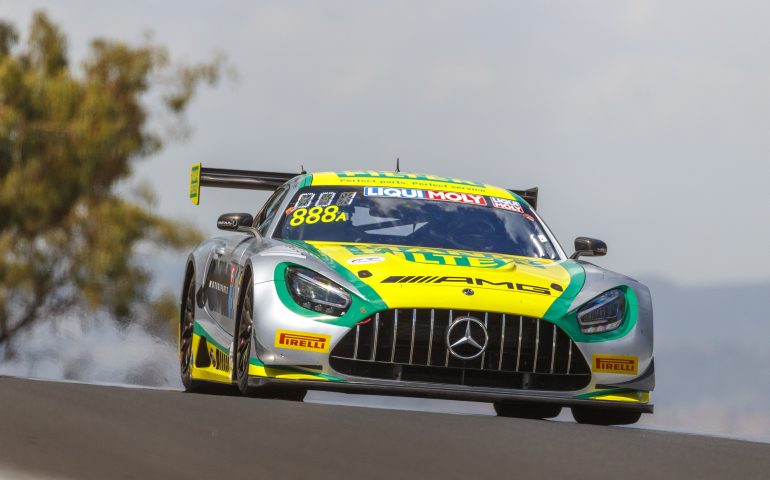 The Aussie team finished 1-2 after four sessions on the Mountain today to show their true form ahead of qualifying tomorrow and Sunday’s around-the-clock enduro.

Supercars champion and former 12-hour winner Shane van Gisbergen set the fastest time of the day in his Mercedes AMG GT3, to be shared this weekend by Supercars teammate Jamie Whincup, and German ace Maximilian Goetz.

Teammate for the weekend, Anton de Pasquale, followed closely behind to give the Aussie team a lockout at the top of an ultra-competitive field after the first day of on-track action on the Mountain.

The 2016 Bathurst 12 Hour champion a quickest time of 2:03.9649 in the final practice session to top a competitive day of practice – staged in scorching 35-degree temperatures.

Van Gisbergen said both cars attempted a qualifying simulation late in the day, electing to show their potential early in the weekend.

“The car is awesome. Our two cars were up the front on low fuel and new tyres – other teams won’t be doing that. It feels good for now and we’ve got a good handle on what the car is doing.

“It’s a very different style to how the Europeans do it; they will be hanging out to qualy.”

Borrowed by the team from regular Supercars rivals Erebus Motorsport, de Pasquale was another to star in the final session and will share his The Bend Motorsport Park Mercedes AMG with Nick Foster and Adelaide brothers, Sam and Yasser Shahin.

He was only 0.2 seconds behind his Supercars rival, while South African star Kelvin van der Linde was third in the first Audi entry. In the scorching conditions, non-turbo cars dominated proceedings with Mercedes-AMG, Audi, Porsche and Lamborghini entries filling the top-10 positions in practice.

Friday saw 12-Hour competitors tackle four practice sessions to set the tone for the weekend ahead, the usual Bathurst drama a constant throughout a scorching day.

Practice one pacesetter Josh Burdon was impressive early, however on a dirty circuit the young Tasmanian crashed his KCMG Nissan GTR at Reid Park late in the session.

The damage was so severe that the entry, to be been shared by Japanese aces Tsugio Matsuda and 2015 winner Katsumasa Chiyo, was later withdrawn from the event having been judged unrepairable. The field now stands at 38 cars following the Nissan’s withdrawal.

One of last year’s standout drivers, Swiss pilot Raffaele Marciello, lifted the #999 Mercedes-AMG Team GruppeM Racing up to the top spot in Practice Two as he lapped the Mount Panorama circuit in 2:04.7819, almost two seconds than Burdon’s practice one time.

Initially running as the fastest car on track, the #77 Craft Bamboo Black Falcon entry of Maro Engel found itself in the wall after Griffin’s Bend late in the session, giving the team a big job to repair the Mercedes AMG GT3 – though it would later return to the circuit competitively following successful repairs.

Bathurst winner David Reynolds elevated the #75 SunEnergy1 entry to the top of the order late in the third practice session thanks to a 2:04.9312s effort – the repaired Engel AMG second and just two-tenths down.

The final session of the day saw slightly cooler track conditions and the fastest times of the day as drivers tackled something of a qualifying simulation at the very end of the session.

The battle was ultimately won by van Gisbergen: The Kiwi becoming the first and only driver to lap beneath the 2m04-second barrier today. Having topped the charts for much of the session, de Pasquale finished the day second to his teammate.

A final one-hour practice session will see the field on track at 8:45am on Saturday morning prior to a two-part qualifying session.

Practice resumes at 8:45am tomorrow morning before qualifying begins at 12:40pm, followed by two more sessions to determine the grid for Sunday’s race.