Erik Cais lost out on his first FIA European Rally Championship victory in dramatic circumstances when he crashed into retirement on the final stage of the 50th Barum Czech Rally Zlin, handing a record-extending ninth outright event win to Jan Kopecký in the process.

The 22-year-old local hero was 20.2s in front on the back of a stellar drive in his Yacco ACCR Team Ford Fiesta Rally2. But a crash approximately 13 kilometres from start of the deciding Májová stage meant heartbreak for Cais and co-driver Jindřiška Žáková, who climbed out of their overturned car uninjured. 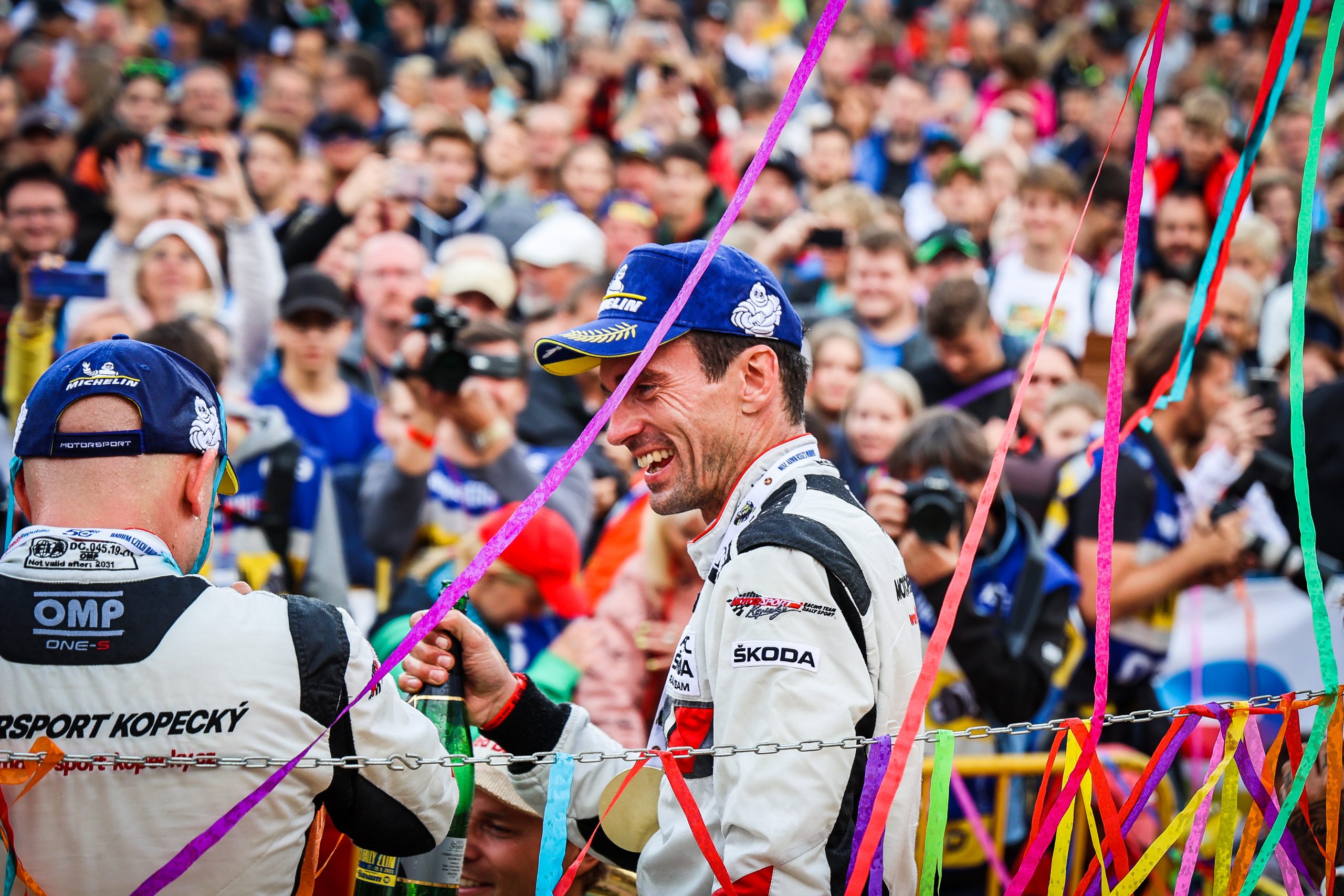 Cais only took up rallying in 2018 after injury forced him to call time on his career as a professional downhill mountain bike racer. He progressed to the ERC’s top-flight via single seasons in ERC3 Junior and ERC1 Junior and has enrolled in the ERC-MICHELIN Talent Factory for 2021. Although he’s shown promise throughout his stint in the European championship, his performance on his local event underlined his incredible progression. It was therefore an agonising end to a stunning display by Cais and Žáková, which included wins on both passes of the legendary Pindula test among seven fastest stage times.

Kopecký, who admitted earlier in the event that his compatriot had the beating of him, said Cais was the real winner at the finish of the final stage. “He deserved the win, that’s easy,” said the Agrotec Škoda Rally Team driver. “He was unbelievably fast in Pindula but the rally finishes on the podium. Erik was the king of today, he did a really great job except for one mistake which cost him the win of the rally. But we are doing this sport to be successful and that’s the main target and I would like to say a big thank you to my co-driver Jan [Hloušek]. We only had a few months to build the team and find the sponsors and partners and so we also deserved this win. This was the most difficult Barum Rally I have done in my career with the conditions changing all the time.”

Cais: “It was a slippery place, there was a little straight into a right-five. I was quite good on the braking but I expected there would be not so much slipppy and it slipped from the left rear and there was no way back. I hit something in the ditch and it broke the wheel and rolled one time and stayed on the side. It was a small mistake with a big impact and I apologise to everyone. But I hope we made Zlín proud and the Czech Republic proud on some stages and I want to thank all the fans and my team and my partners who are supporting me in these hard times. I feel a pain in my heart but now we have to focus on the Azores.”

Andreas Mikkelsen arrived in Zlín one point behind Alexey Lukyunuk in the ERC standings. But when Lukyanuk was unable to start following a car-wrecking testing crash on Wednesday, Mikkelsen was handed a gilt-edged opportunity to move into the European championship lead, which he maximised in his Toksport WRT Škoda by finishing second. “This was really important for the championship and we now have quite a good margin,” the Norwegian said. “Of course it’s a shame Lukyanuk didn’t do the rally because he would have definitely mixed in with the fight. I’m happy with our performance this weekend, we knew it was going to be difficult with the Czech drivers because it’s almost 10 years since I was last here. But I would definitely have signed for second place before the rally.”

Filip Mareš was another driver to benefit after Cais crashed out, the 2019 ERC1 Junior champion taking third place to complete and all-MICHELIN-equipped Škoda podium. “To be on the podium on this difficult rally is amazing and I am very satisfied,” said Mareš. “It’s bad luck for Erik, he deserved the victory but it’s like that and third place is fantastic for us.”

Callum Devine was the best-placed Zlín rookie in seventh in his Motorsport Ireland Rally Academy Ford Fiesta Rally2 as Miroslav Jakeš, Yoann Bonato (CHL Sport Auto Citroën C3 Rally2) and Martin Koči rounded out the top 10. Slovakian Koči’s 10th place was particularly notable after he was called up to replace Roman Odložilík on the eve of the event.

Simon Wagner was heading to a fine fourth until a broken driveshaft wrecked his hopes on SS12. Jari Huttunen crashed his Team MRF Tyres entry on SS7 and was unable to restart due to damage. Albert von Thurn und Taxis also failed to complete SS7, while Adam Březik was unable to start the test due to a mechanical failure. He did restart on day two, however, but went off the road on SS12. Tomáš Kostka’s rare rally start lasted for less than two stages after the Czech damaged his Fabia’s front-right wheel hitting a tree on SS2. Dominik Stříteský, who scored a championship point on his ERC debut in Roma last month, crashed at high speed on SS3 and was taken to hospital for precautionary checks.

Champion Érdi Jr takes first ERC2 victory of 2021, Poloński unbeaten in Abarth Rally Cup
Defending champion Tibor Érdi Jr scored his first ERC2 win of the season – but breathed a sigh of relief aboard his Mitsubishi Lancer Evolution X. The Hungarian started leg two leading the production-based class by 36.3s but returned to midday service in Otrokovice 14.6s in front of Victor Cartier. However, Cartier had completed SS12 with water pouring from his Toyota Yaris Rally2 Kit due to a damaged radiator and the Frenchman would go no further, leaving Érdi Jr to take an impressive victory ahead of Abarth Rally Cup winner Dariusz Poloński. Martin Rada and Roberto Gobbin finished third and fourth in ERC2 and second and third in the one-make Abarth series respectively. Csaba Juhász was fifth after a succession of problems, as Michał Pryczek recovered to finish sixth after crashing on SS4 and overcoming a puncture on SS12 in his Subaru Impreza. Dmitry Feofanov remains on top of the ERC2 standings but is now equal on points with Poloński after a fraught weekend. The Latvia-based driver went off the road on SS6, restarted this morning but crashed out for good on SS12.

Bassas is the ERC3 boss as Franceschi fights back to win ERC3 Junior
With a lead of 56s starting the final leg, Rallye Team Spain’s Pep Bassas delivered the perfect blend of speed and consistency to win ERC3 in his Pirelli-equipped Peugeot 208 Rally4. Jean-Baptiste Franceschi (Toksport WRT Renault Clio Rally4) finished second in ERC3 and added the ERC3 Junior victory to his list of achievements despite being handed a three-minute time penalty for an early check-in on Saturday morning. Rapid Romanian Norbert Maior beat Martin László to second place in ERC3 Junior and third in ERC3 by 4.0s after his Hungarian rival went off the road at a junction close to the finish of SS14. Local driver Daniel Polášek completed the ERC3 Junior top four. Łukasz Lewandowski placed eighth in his Opel Corsa Rally4 with Adrienn Vogel and Ekaterina Stratieva P11 and P12 respectively. Sami Pajari, Nikolai Landa and Nick Loof restarted this morning following their exits on day one and finished P13-15 respectively in ERC3 and fifth-seventh in ERC3 Junior. Alejandro Cachón restarted after going off the road on leg one but retired his Rallye Team Spain-entered Peugeot with a broken turbo after SS10.

Torn in control in ERC Junior
With fellow Estonian Kauri Pannas co-driving, Ken Torn took another important step towards winning the FIA ERC Junior Championship – and the FIA Junior World Rally Championship prize drive in 2022 – with the class win ahead of Oscar Solberg, who restarted following his day-one off. Torn, who now has three ERC Junior victories under his belt, also underlined the competitiveness of his Pirelli-equipped Ford Fiesta Rally3 by finishing in the top 15 overall.

Mabellini makes it a Clio Trophy by Toksport WRT hat-trick
Andrea Mabellini extended his winning run in the Clio Trophy by Toksport WRT to three events with another strong showing alongside co-driver Virginia Lenzi. The Italian beat Bastien Bergounhe and Ghjuvanni Rossi to second and third respectively. For Bergounhe, the result marked his best finish so far in the arrive-and-drive series for the Renault Clio Rally5 on MICHELIN tyres, while Rossi has finished on the podium on all four rounds run so far. It was a fraught morning for Paulo Soria, however. The Argentine dropped from second overnight to fourth after contact with a chicane on SS11 left his car with a damaged turbo pipe. It got worse on SS12 when a heavy landing broke his Clio’s rear suspension.

P1 Racing Fuels Podium Challenge rewards drivers
The P1 Racing Fuels Podium Challenge continues in 2021. It rewards the top three finishers in ERC1 and ERC2 on all rounds of the championship with fuel vouchers that can be exchanged for P1 XR5 race fuel at subsequent events, helping competitors to further reduce the cost of competing. Across both categories, the winning drivers received 150 litres of fuel, while the second and third placed drivers received 100L and 50L respectively. More information: www.p1racingfuels.com