It was a day of disruption in Bahrain – with red flags peppering the days running – while Carlos Sainz led the way during the official time on track with a 1’33.532 on soft tires during the afternoon session. Max Verstappen took his Red Bull up to 2nd place on the day with a time 0.479 seconds behind Sainz. With roughly 40 minutes left in the afternoon session the two drivers put on a display of wheel-to-wheel battling and late braking, showing how the new cars act around one-another.

Lance Stroll in his Aston Martin completed 69 laps with his day ending 3rd fastest on the timesheets, while Lewis Hamilton ended with the 4th fastest time after finishing 11th fastest the prior day.

With 90 minutes left in the afternoon session Esteban Ocon ground to a halt on track, bringing out the 4th red flag of the day, however he was able to continue after returning to the pits and finished 5th fastest with 111 laps completed on the day.

McLaren also brought out a red flag after Ocon, with Lando Norris coming to a stop at pit exit; he too was able to continue for the remainder of the day once the team performed repairs. Norris finished 6th fastest on the day and will remain in the car as Daniel Ricciardo tested positive for Covid 19 this morning. Ricciardo was confirmed to be in good spirits and is expected to be clear to start for the season, but will not test in Bahrain.

Williams had a day to forget after their day ended only 12 laps into the morning session. While Nicholas Lafiti was on track, the rear of his FW44 began to smoke as his brakes caught fire. Coming to a halt on track, the fire grew and a small explosion at the rear of the car caught the marshals by surprise as they attempted to extinguish the flames.

The team announced later via Twitter that they were done for the day:

Repairs are underway on the FW44. We will not take part in the remainder of today’s running but look forward to hitting the track for the final day of testing here tomorrow 🙌 pic.twitter.com/T3eTjUHJ67 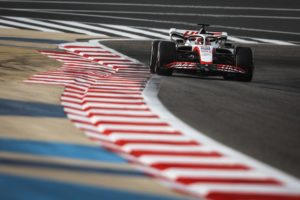 Kevin Magnussen made his return to the cockpit today after a day of running by Pietro Fittipaldi with the Dane setting the fastest lap time of the entire day during the teams special running time after the afternoon session. As previously reported, the Haas team faced a delay with their equipment arriving to the circuit only one day prior to the test and were granted additional running time after the afternoon sessions to ensure they received a fair amount of time on track. His 1’33.207 would be about 3/10ths faster than Sainz, but did not count towards the official FIA timesheets.

With one day remaining, the “heat is on” as teams complete their sessions in anticipation for the Bahrain Grand Prix in one weeks time.

‘Porpoising’ still a problem for some 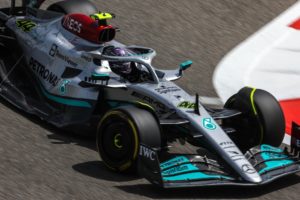 Mercedes driver Lewis Hamilton admitted Friday that some of their rivals are handing the ‘porpoising’ issue better than they are. When the Mercedes was revealed on Thursday with the dramatic sidepod design, much noise was made by the paddock that this would be a performance upgrade to watch, however Hamilton admitted that the changes hasn’t lived up to expectations.

In an interview, said Hamilton:

‘The package is very similar…it’s just really the wind, the bouncing that we have – we still have that this week, if anything it’s worse – so we’re just working through lots of different scenarios, trying to work out how to hold onto the downforce and not have it bouncing as it was in the last test…I think everyone’s probably in a similar boat. Some have managed to get around it in a better way’

Red Bull team boss Christian Horner believes though that the Mercedes are disguising their true pace, however Hamilton rejects those statements saying that the difficulty he and Russell are having in the car show this is untrue.

‘We’d be really, really good if we were having all these oversteer moments and having this tacky driving just to hide our cars…that’s not the case.’

With a single day of testing left it will be interesting if Mercedes suddenly shows their full strength – assuming that rivals Red Bull and Ferrari are correct in their assumptions – or if they continue to struggle with the 2022 package.