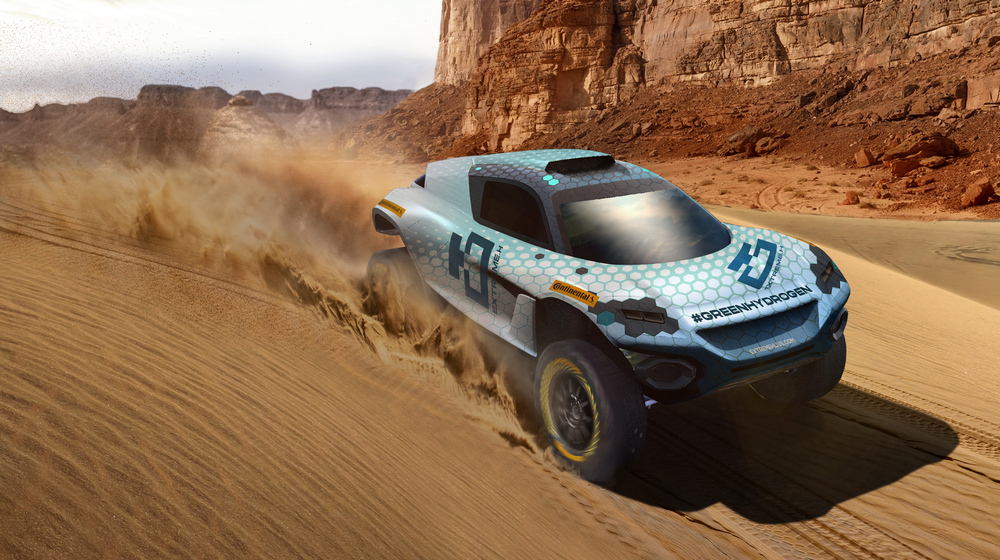 Extreme E, the motorsport for purpose, has revealed its plans to launch an off-road hydrogen Championship in 2024. Named Extreme H, it will sit alongside Extreme E, its existing electric racing series, and will be a world-first for motorsport.

Alejandro Agag, who was recently given Autosport 2022’s ‘Pioneering and Innovation Award’, announced the news ahead of Extreme E’s Season 2 opening race, the Desert X Prix, in NEOM, Saudi Arabia. He said: “Extreme E was designed to be a testbed for innovation and solutions for mobility. It has become increasingly clear to us that creating a hydrogen racing series is a natural evolution of our mission to showcase the possibilities of new technologies in the race to fight climate issues.

“Together with the current Extreme E Teams we will decide in the coming months the best way to integrate the Hydrogen powered cars into the racing weekend. Two separate categories, full transition to Hydrogen or joint racing are all options on the table.

“Extreme E is an FIA International Series and our intention is to work closely again with the FIA and the Automobile Club de Monaco on the development of Extreme H. Sport is the fastest and most effective platform for driving innovation, and by using the existing Extreme E platform we can also utilise our transport, talent and operations to ensure we are minimising footprint in the process. This effectively means we can have double the race action, with marginal additional impact.”

The Extreme H car will retain the same powertrain and chassis used in Extreme E. The key differentiating factor in Extreme H will be that a hydrogen fuel cell will replace the battery as the principal energy source.

Green hydrogen sources will be used to power the Extreme H fuel cells, created using a combination of solar and water. This technology is already being used behind the scenes in Extreme E, where it provides the energy source to the vehicle’s batteries.

Alejandro added: “It is fitting to launch the concept of Extreme H here in NEOM, a place with huge ambition around clean energy solutions, and the perfect example of a location which can and will become home to large-scale green hydrogen production and distribution.”

Peter Wadhams, Extreme E Scientific Committee member and Head of the Polar Ocean Physics Group in the Department of Applied Mathematics and Theoretical Physics at the University of Cambridge, added: “It is exciting that the scope of Extreme E is now to be extended to encompass the renewable world of hydrogen power. At the COP-26 meeting in Glasgow last November there was a positive crowd of hydrogen vehicles, demonstrating the potential of this energy source, especially for larger vehicles. There was a bus, an ambulance, a JCB digger and several trucks. In amongst them was the McLaren Extreme-E electric car.

“I have seen hydrogen power in action in Orkney, where hydrogen is created in the outer islands using wind power, compressed and brought to Kirkwall by ferry, then used to power the Kirkwall fleet of public service vehicles. There are so many exciting possibilities of this kind which will be supported and energised by the publicity given to hydrogen vehicles by Extreme E.”

Jenson Button, Team Owner of the JBXE Extreme E team, said: “For Extreme E to be evolving into Extreme H is incredibly exciting and a brilliant step forward in such a short space of time for the series. To see racing of this calibre powered by Hydrogen cells, which will allow for even more racing with less impact, is remarkable.”

Nasser Al-Attiyah, ABT Cupra XE driver, said: “I think it’s a good idea to have a new Championship with hydrogen in close contact with Extreme E. I think it will be interesting to see how well the new event goes. I hope everybody will enjoy it and it will also be fascinating for the manufacturers. There has been some pressure for hydrogen to be a part of the motorsport world, and I think it is a good idea so we’ll see what we can do.”

Dan Bailey, CEO of Veloce Racing, said: “Veloce always supports innovation, which is exactly why we got involved in Extreme E from the very start. Hydrogen is a key pillar for the future of the automotive industry. We’re excited and supportive of the future plans and look forward to seeing how it develops.”

Extreme E’s operations utilises various methods to keep its overall carbon footprint as low as possible. Examples include; using a refurbished ship for transporting the Championship’s freight and logistics equipment, including race cars and paddock; using remote broadcast and digital streaming; capping team personnel numbers; and using a combination of battery power and green hydrogen to power the paddock.

Development for the Extreme H vehicle is already underway, with goals to have a prototype launched in early 2023.