Heavy rain, delayed starts, and red flags. The 2022 edition of the Monaco Grand Prix had it all, and at the end Sergio Perez, on worn and battered medium tires, managed immense pressure over the final 30 minutes of the rain-shortened and red-flagged Monaco Grand Prix to win his 3rd grand prix in Formula 1. Perez, already one of the most respected and liked driver on the grid, added to his resume with a number of stat lines:

After multiple aborted starts due to rain, the race began behind the safety car for several laps before the field was allowed to race on the soggy streets. Pole-sitter, Charles LeClerc, jumped out to a dominate lead early on, setting the tone for what would appear to be a Ferrari 1-2 finish. With a rapidly drying track, teams began to bring their drivers in to pit for dry-weather tires, and Red Bull jumped at the advantage to overcut the Ferrari’s by keeping their drivers out for an additional lap.

Ferrari blinked and brought in both cars for a double stack pit stop to hard-compound tires, while Red Bull pitted Perez from the lead a lap later with Verstappen right behind him. Red Bull split the Ferrari’s, with Perez in the lead over Sainz, Verstappen, and LeClerc, who lost three positions and the lead in the exchange due to yet another pit wall blunder.

Suddenly the thought on everyone’s mind would be at what point do Red Bull pull their team orders and force Perez to backup Sainz into Verstappen, allowing the Dutchman to overtake and eventually assume the lead of the race.

This would all be for naught, however, when on lap 27 the Haas of Mick Schumacher lost control in the Swimming Pool complex and spun into the barrier with the impact ripping his VF-22 in half and scattering debris across the track. Formula 1 quickly brought out the red flags and the entire field with Perez up front, came down pit lane for the 2nd time, allowing drivers to hop out of their cars and teams to devise a strategy to go to the end of what would soon become a time-limited race.

With a free choice of tires, Red Bull and Ferrari opted for differing strategies for the end of the race. Perez and Verstappen were put on new medium tires – a questionable choice as there was a significant chance that they would not last for the remainder of the race – while Ferrari opted for 1-lap old hard tires which were guaranteed to go the distance. On lap 30 of 77, the field went back to the track, behind the safety car for the 2nd rolling start of the day.

With a dry track and all cars on dry-weather tires, the post red-flag period of the race was very much a different beast from the start. Monaco is typically a processional race, with the pole-sitter winning more times than not as the tight circuit is a challenge to pass on…and unfortunately that was exactly the case for much of the remainder of the race.

Positions 1-4, which at times separated by scantly more than 2 seconds, finished exactly as they started in the final stint of the race. Sainz challenged for the lead on numerous occasions, but Perez was able to make his Red Bull as wide as the street itself and kept the Spaniard behind him in an epic display of car control and race craft.

After the race, Sainz admitted he thought he could have won:

‘I felt like we did everything that we had to do out there. We stayed patient on the wets, we took the right decision to go onto the slick, a terrible out-lap stuck behind a lapped car cost me a race win today. You can understand the frustration because a clean out lap could have secured me the race win but it’s how this sport is sometimes.’

Verstappen, in 3rd, was unable to mount any sort of charge for the 2nd podium spot as any risky move would potentially cause him to lose out to title contender LeClerc.

Ferrari, in an effort to twart Red Bull and their result, are protesting Verstappen’s finish as during the pit exchanges he was seen crossing the pit exit line. Should Verstappen run afoul of the stewards, LeClerc would benefit as the penalty would be a minimum 5 seconds, and would promote him onto the podium. It should be noted, Perez was cited for a similar infraction and no penalty was given. 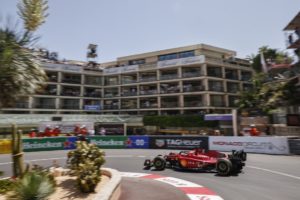 For the first time in his Formula 1 career Charles LeClerc was finally able to finish his home grand prix, however the result was bittersweet. The Monegasque driver starting from pole was the favorite to win the race, one he has been desperate to add to his resume, but the result was not meant to be in 2022. During the pit exchanges in the pre-red flag point of the race, Ferrari called LeClerc in at the wrong time and cost him a chance at the lead. The 4th place finish behind Verstappen pushes him further away from the Dutchman in the drivers standings, and capped a disappointing day for his race.

George “Mr. Consistency” Russell maintained his string of top-5 runs bringing his Silver Arrow Mercedes home ahead of Lando Norris in 6th place. The McLaren driver, still not recovered from a case of tonsilitis, managed a respectable finish for the Woking squad, grabbing valuable constructors points to keep McLaren ahead of Alfa Romeo in the battle for 4th.

Further down the field, world champions Fernando Alonso and Lewis Hamilton put on an epic display of race craft as the two scrapped for 7th and 8th place and Alfa’s Valterri Bottas and Aston’s Sebastian Vettel rounded out the top 10.

From the slowest track on the circuit to one of the fastest, Formula 1 will head to the port city of Baku in Azerbaijan for the Azerbaijan Grand Prix. Boasting a mix of tight turns and long, fast straights, the circuit has become a driver and fan favorite, showcasing tremendous top-speeds and epic overtaking. Sergio Perez, the 2021 winner, would love to extend his win streak and bring his name into discussion for the 2022 title as Red Bull will be the favorite coming into the race.

Coverage begins on Friday, June 10th as teams take a 2 week break before the next leg of back-to-back races.