“The Formula 1 2022 season continues to set records, as we’ve seen exciting action and unpredictable outcomes on the track. We are attracting fans in person and across all our platforms,” said Stefano Domenicali, Formula 1 President and CEO. “We are making meaningful progress working with all of our stakeholders including our teams, race promoters, the FIA and business partners towards our goal to hit net-zero carbon by 2030.” 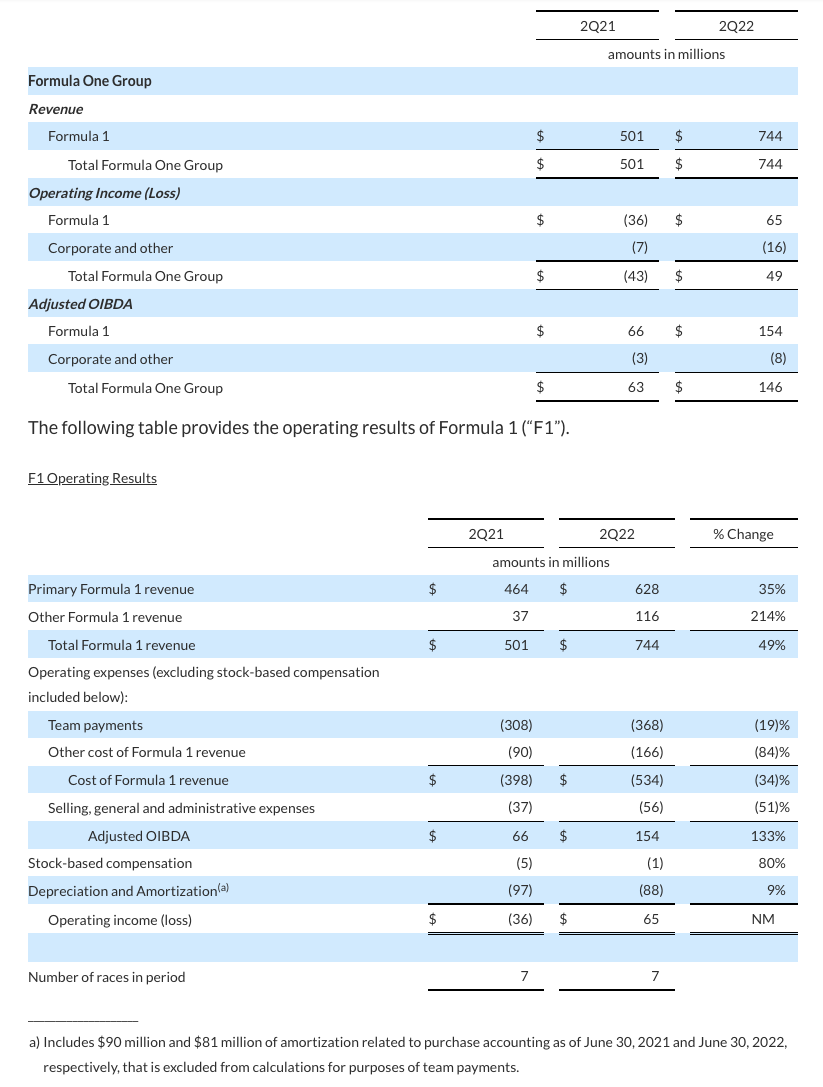 There were seven races held in the second quarters of both 2022 and 2021. Throughout 2021 and particularly in the first half of the season, attendance at races was limited due to the pandemic, and the Paddock Club did not operate in the first half. F1 does not expect its results in 2022 to be impacted by such capacity limitations, though fan attendance continues to be assessed by relevant government authorities on a race-by-race basis. Throughout the first half of the 2022 season, F1 has experienced record attendance in both grandstands and the Paddock Club. There are currently 22 events scheduled for the 2022 race calendar.

Primary F1 revenue increased in the second quarter with growth across race promotion, media rights and sponsorship. Race promotion revenue increased due to higher fees generated from the different mix of events held and contractual increases in fees. Media rights increased due to growth in F1 TV subscription revenue and increased fees under new and renewed contractual agreements. Sponsorship revenue increased due to the recognition of revenue from new sponsors and higher race-specific revenue generated from the different mix of events held. There is a slightly higher proportionate recognition of season-based media rights and sponsorship income recognized during the quarter as 7/22 of revenue was recognized in the second quarter of 2022 compared to 7/23 of revenue recognized in the second quarter of 2021 before the reduction of the 2021 race calendar to 22 races was confirmed.

Other F1 revenue increased in the second quarter primarily due to an increase in freight revenue driven by the increased number of events held outside of Europe and inflation in underlying costs, as well as higher hospitality revenue generated from the Paddock Club, which F1 operated at 5 races in the second quarter of 2022 but was unable to operate in the prior year period.

The businesses and assets attributed to the Formula One Group consist of Liberty Media’s subsidiary F1, its interest in Liberty Media Acquisition Corporation, other minority investments and an inter-group interest in the Braves Group.