THE class grid order for the GT4 and Invitational entries have been finalised in favour of Brett Strom and Nick Percat respectively after an accident shortened qualifying session ahead of tomorrow’s Liqui-Moly Bathurst 12 Hour. 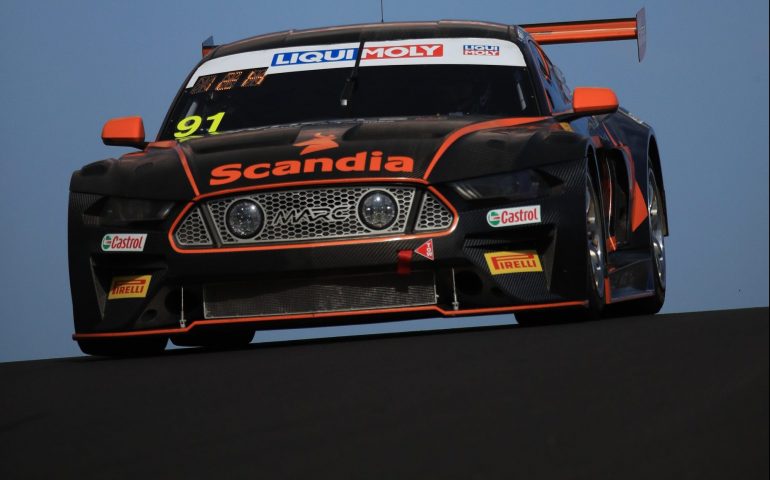 In the only qualifying session for those in the C (GT4) and Invitational classes, the 45 minute outing provided their only opportunity to set a grid position for tomorrow’s race.

A large accident at the top of the Mountain brought a halt to the session after the #777 Mercedes AMG GT3, driven by Sam Shahin, was tagged by the #6 Lamborghini Huracan GT3 of Cameron McConville, sending the Merc into the outside wall at McPhillamy Park.

The accident will likely see both entries scrapped from the starting list, joining the #27 Hub Auto Corsa Ferrari of Tim Slade, Marcos Gomes and Daniel Serra after the latter driver crashed at the end of Practice Five.

Qualifying resumed with 25 minutes remaining, being shortened thanks to the extended delay with only three Invitational cars taking part.

Cloud cover over the circuit after the restart meant Percat was able to go quicker still, dropping just three-tenths off his best time to further extend the margin over Luff’s sister entry.

Further lowering the bar, Percat went below the minimum time for Invitational cars of 2:06 to prove the MARC entry’s real pace, completing a lap in 2:04.8551 which was good enough for eighth overall before the time was deleted.

Strom was able to edge out Muller by just four-tenths of a second, his time of 2:16.8128 good enough for the pole in the two-car GT4 class.

Overall in the GT3 class, Raffalele Marciello leads into the second, shorter qualifying session after touring Mount Panorama in 2:03.6431 aboard the #999 GruppeM Racing Mercedes AMG GT3.

His time was over half a second faster than next quickest driver Kelvin van der Linde, the South African moving to second in the #222 Audi Sport Team Valvoline R8 LMS GT3.

Qualifying continues for Class A cars only after a short break between sessions, setting a majority of the grid and sorting out who will make this afternoon’s Top Ten Shootout.