Kristoffersson took his third win of the 2020 World RX season with Kristoffersson Motorsport, leading the final in Riga for all six laps in a Volkswagen Polo. The Swedish driver qualified second in the Intermediate Classification, took victory in semi-final two, and won the final to extend his Championship lead to 21 points. 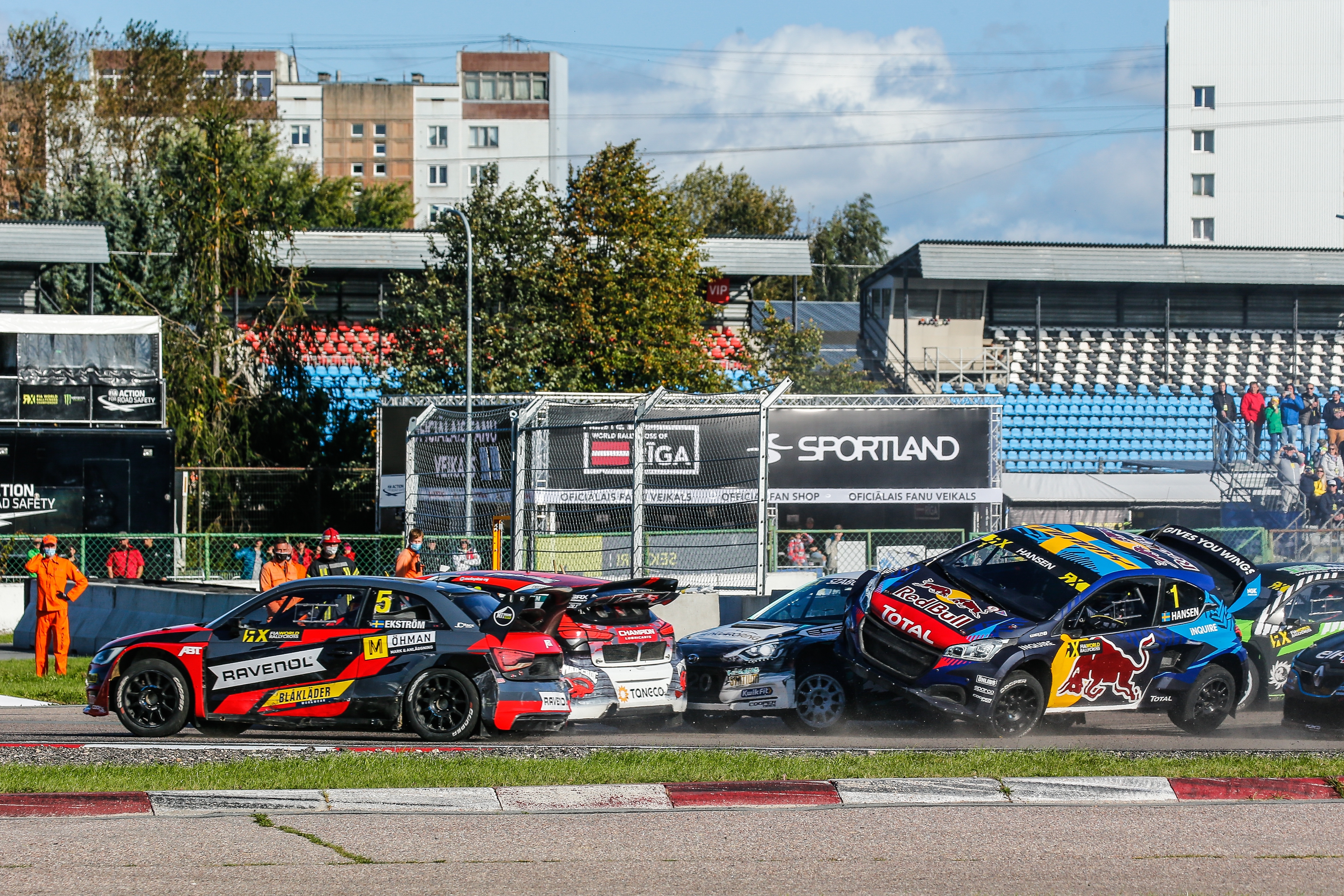 Sweden’s Mattias Ekstrom battled his way to victory in semi-final one to start on row one of the final, then used a superior joker lap strategy by KYB Team JC team to take second, his fourth podium of the 2020 season. Team Hansen’s Timmy Hansen completed the podium to not only make it an all-Swedish top three but to ensure the podium was filled by World RX Drivers’ Champions (Kristoffersson 2017-18, Ekstrom 2016, Hansen 2019).

The TQ (top qualifier) position in the Intermediate Classification was taken by Finland’s Niclas Gronholm, the winner of World RX round four in Finland. The GRX Taneco driver finished second in semi-final one, then had a battle with Sweden’s Kevin Hansen in the final but spun out of podium contention.

Kevin Hansen climbed to second at the start of the final from row three and took his joker on lap two. He defended from Gronholm for over two laps, then challenged brother Timmy Hansen for the final podium place at the last corner of the race. He finished fourth. Gronholm was classified fifth and Sweden’s Robin Larsson, Ekstrom’s KYB Team JC teammate was sixth, following contact and a spin at the second corner. KYB Team JC maintained its position in the lead of the Teams’ Championship standings.

“This feels very good. We were really pushing hard in Q2 and Q3, I was not really able to pull off the best times, but instead we had some good tyres for the semi-final and final so I think we had a big jump on our competitors or terms of tyres, then we had two good starts, and everything is much easier when you have fresh tyres. Big thanks to the team, we made some changes between Q3 and the semi-final and it actually made the car better so that feels good to gamble and go in the right direction,” said winner Kristoffersson.

Ekstrom’s podium was the 25th of his career. “The first corner of the final was a little bit too exciting, I don’t know exactly what happened to Robin, we’ll have to watch the television, but it was a bit messy and after I drove as fast as I could behind Kevin. After he jokered I had a clear track and ended up P2. For sure that was not our wish when we came here, we wanted to win but during qualifying we were not good enough so we couldn’t do good enough starts so we couldn’t be at the front in Q1 and Q2. When you’re on the back foot then you have to try and recover and I think P2 is a good recovery, but you need to be spot on to win these races especially when the other guys are in top shape as well,” said Ekstrom.

Hansen was pleased with a podium finish after a hard-fought day in Riga. “We had a tough day. We see glimpses of really good performance, some good launches and I’ve been fastest on lap time many times today, but you know when you’re not up front then it’s not easy. We need to improve those launches so we can be at the front of the races from the beginning. I must say coming in third is really good and I’m super happy about that. The team has worked so hard and it is paying off, but at this level, it’s a slow process to gain speed, but I’m quite confident tomorrow will be even better,” said Hansen.

Norway’s Andreas Bakkerud, racing a Renault Megane RS RX for the Monster Energy GCK RX Cartel team was fourth in semi-final one after he lost time in turn two of the race. ALL-INKL.COM Muennich Motorsport’s Timo Scheider, from Germany, was fourth in semi-final two. He qualified 13th in the Intermediate Classification but started the semi-finals when his teammate Rene Muennich withdrew. Scheider used the joker lap strategy to beat GRX Taneco’s Timur Timerzyanov, from Russia. Monster Energy GCK RX Cartel’s Liam Doran, from Great Britain was classified sixth in the same race. Latvia’s Reinis Nitiss, on his debut in the Esmotorsport Skoda Fabia, beat GRX SET’s Krisztian Szabo, from Hungary, for fifth in semi-final one.

Germany’s Rene Muennich was classified 13th in the final results following his withdrawal from the semi-finals that lifted his ALL-INKL.COM Muennich Motorsport team mate Scheider into the top 12. GCK Bilstein’s Anton Marklund, from Sweden, was 14th Unkorrupted team mates Guerlain Chicherit, from France, and Rokas Baciuska, from Lithuania were 15th and 16th in their Renault Clios. Ferratum Team’s Jani Paasonen, from Finland, retired from Q2 with a technical problem and didn’t take part in Q3.

Paul Bellamy, Senior Vice President of Motorsports Events at IMG, concluded: “Johan once again proved today why he is such a highly-rated racing driver, as he claimed another victory at the track where he was crowned as a World Champion for the first time in 2017. Well done to him, Mattias and Timmy for finishing on the podium. It was fantastic to have fans on site for the first time this season, and I must say a big well done to the Latvian event promoter for managing to welcome a limited number of public in these challenging 2020 circumstances. The paddock is now preparing to do this all again tomorrow for World RX round six, before the third edition of the new RX After Track fuelled by Monster Energy on our Facebook and YouTube channels.”