The No. 7 crew has finished runner-up in LMP1 for the past two seasons making today’s drivers’ title even sweeter. It is also a landmark moment for Jose Maria Lopez as he becomes only the third person ever to become a drivers’ champion in two different FIA World Championships [WTCC and now the WEC]. Meanwhile, Mike Conway has become the first British drivers’ champion in LMP1 since Anthony Davidson back in 2014. Indeed, it is the No. 7 car’s best season to date in the WEC with a total of four victories. 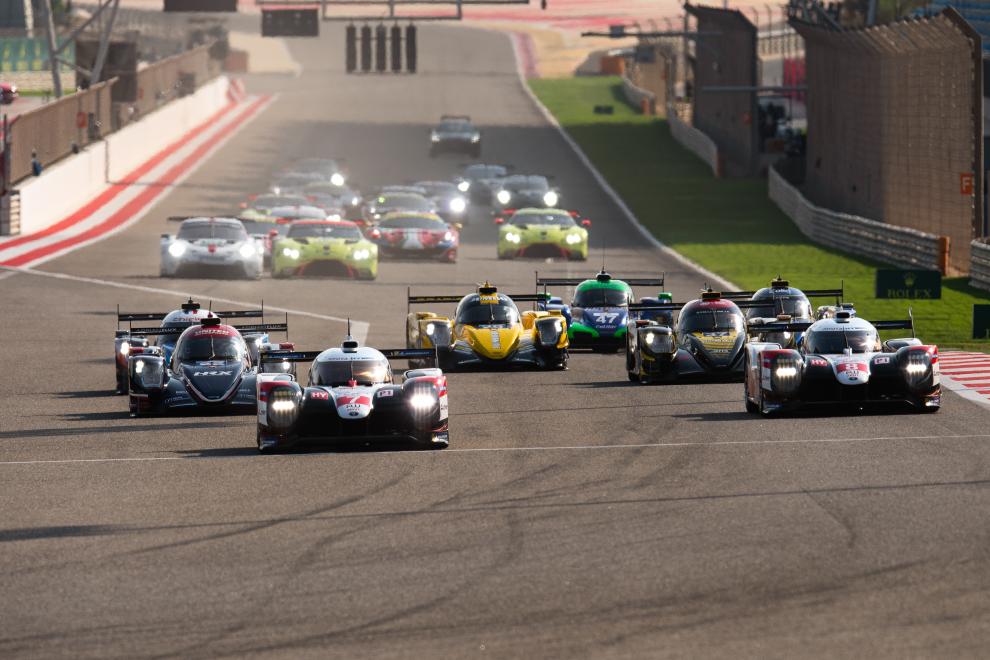 Conway, Lopez and Kobayashi end the season with 107 points – just five points ahead of the sister No. 8 car shared by Brendon Hartley, Sebastien Buemi and Kazuki Nakajima who take the runners-up spot in the drivers’ championship.

Overall, it was a relatively trouble-free race in LMP1 with the No. 7 taking full advantage of the success handicap which saw the sister car pegged back by 0.54s per lap to claw a one minute advantage by the third hour. A safety car mid-race due to debris on the track saw the gap between both cars diminished but after action resumed the No. 7 once again sped ahead eventually finishing the race just over one minute ahead the sister car.

Bahrain marks the final time that the hugely-successful Toyota TS050 HYBRID will be seen in competitive WEC action before it is replaced by Hypercar for 2021. 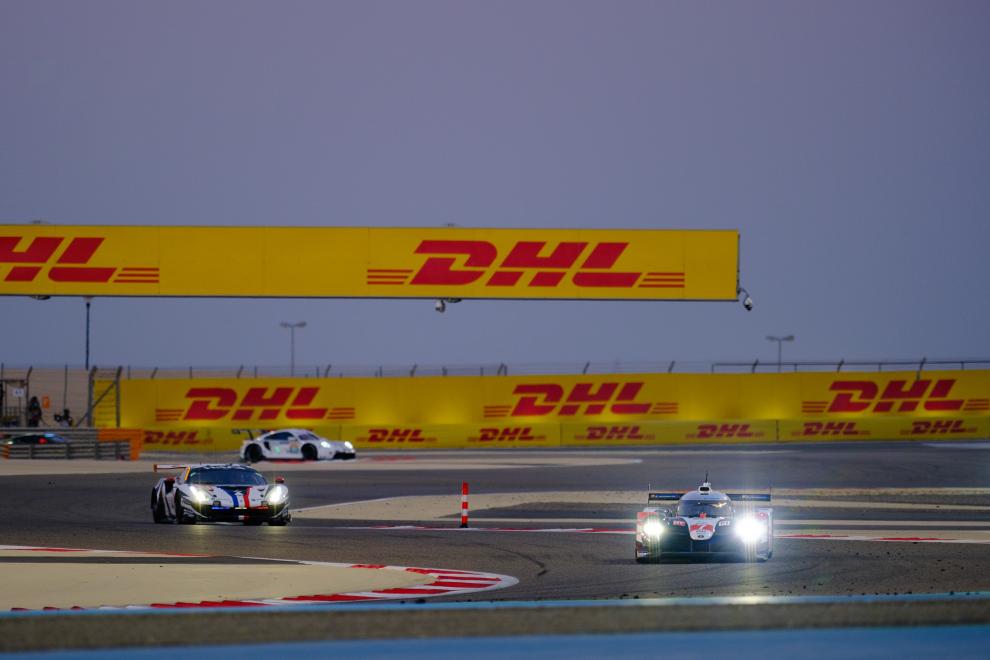 Jackie Chan DC Racing ended the FIA WEC season on a high with the No. 37 car’s first victory of the season in the ORECA 07 Gibson shared by Ho-Pin Tung, Gabriel Aubry and Will Stevens.

Aubry provided a thrilling battle in the closing stages of the race as he and Antonio Felix Da Costa in the No. 38 JOTA car were neck-and-neck fighting for P1, with Aubry crossing the finish line just 1.894s ahead of Da Costa to take 38 championship points. The JCDCR’s win is the second WEC victory for a car equipped with Goodyear tyres.

The Racing Team Nederland ORECA shared by Nyck de Vries, Giedo van der Garde and Frits van Eerd took third place. United Autosports, which wrapped up the teams’ title at Le Mans in September, ended up nearly half a minute behind in fourth following a fuel glitch, a five-second penalty and a spin out on track half-way through the race. The British squad has also wrapped up the teams’ titles after Phil Hanson and Filipe Albuquerque accrued enough points to take the accolade – third team-mate Paul Di Resta missed out after missing a championship race in Fuji.

Elsewhere, Signatech Alpine Elf finished fifth – the French squad struggling to fight back after a small off in the race’s second hour with André Negrão at the wheel. Italian Cetilar Racing finished sixth in class, the crew losing time due to a late brake change and a lengthy spell in the pits at the end of the race. 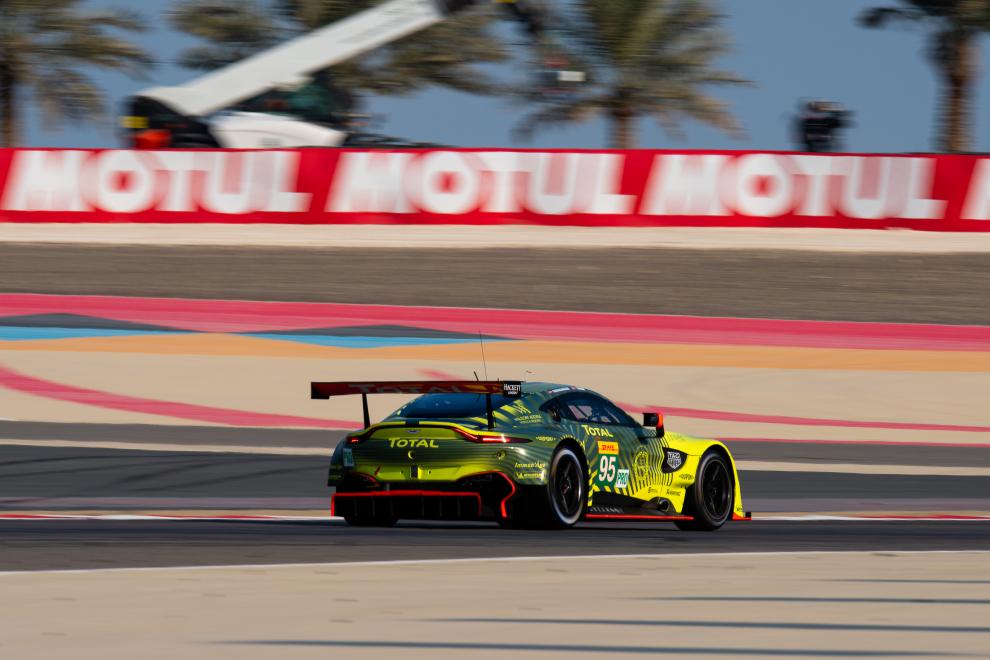 The No.92 Porsche 911 RSR-19 of outgoing GT Champions Kevin Estre and Michael Christensen had a dominant run to victory in the always closely-contested class, finishing just 2.8 seconds ahead of the sister Porsche GT Team No.91 entry to make it a 1-2 for the German manufacturer.

It was Porsche’s first GTE Pro victory in Bahrain since 2015 and the win takes it past the milestone of 50 victories in the WEC. The result also means that Porsche finishes second in the FIA GTE Manufacturers championship.

Third in class went to the No.71 AF Corse Ferrari 488 GTE EVO of Davide Rigon and Miguel Molina, the duo upholding Ferrari honour after the title-contending No.51 Ferrari of James Calado and Daniel Serra – subbing for an absent Alessandro Pier Guidi – struck misfortune. Just after the halfway point in the race Serra had contact with a GTE Am car and the resulting puncture caused left rear damage. Although the repairs were rapidly carried out, they were 4 laps behind and went on to finish a lonely 6th in class.

Despite a tough race thanks to an ill-timed Full Course Yellow and overheating brakes which necessitated a disc and pad change after 4 hours, 5th place in the GTE Pro class was enough for Aston Martin Racing’s jubilant Nicki Thiim and Marco Sørensen to secure the FIA GTE World Endurance Drivers Championship.

It’s a first full FIA World Championship title for the Danish duo but the second time they have taken the title for the category – the first being the FIA World Endurance Cup in 2016. Aston Martin Racing sealed the FIA GT Manufacturers Championship following victory in Le Mans in September.

The No.97 Aston Martin entry of Maxime Martin and Richard Westbrook – the latter standing in for Alex Lynn for this round – finished a lap ahead of the Dane Train, and the 4th place saw Belgian Martin take 2nd in the Drivers’ final classifications. This entry also suffered overheating brakes and also had to pit for new brakes.

Although AF Corse Ferrari had a tough time in the Pro category, it all came good for them in GTE Am after an exciting race which saw multiple different names at the top.

Second place for the No.83 488 GTE EVO of Emmanuel Collard, François Perrodo and Nicklas Nielsen and a less than perfect race for points leader TF Sport saw them take the 27 points on offer for the 8-hour race and wrap up the FIA World Endurance Trophy for LMGTE Am. It is Perrodo and Collard’s second title and a first for Nielsen in the WEC.

Claiming a final win for the outgoing Porsche 911 RSR was the No.56 Team Project 1 of Egidio Perfetti, Larry ten Voorde and Jörg Bergmeister, the tall German making his first WEC appearance this year in place of Matteo Cairoli. It was Perfetti’s third win of the year and ten Voorde’s second, his last coming a year ago in Bahrain.

Third in class was the No.88 Dempsey Proton Racing Porsche of Emirati Khaled Al Qubaisi, Jaxon Evans and Marco Holzer.

Pre-race title pretenders, the No.90 TF Sport Aston Martin Vantage AMR of Salih Yoluc, Charlie Eastwood and Jonny Adam, were also hampered by the same braking issues as the Pro entries and lost too much time. They finished just one laps behind but back in 8th place in the well-populated category.

Race results can be found HERE.

Championship results can be found HERE.