Colton Herta kickstarted the “Month of May” for the NTT IndyCar series, taking the win and put on clinic during what can only be described as one of the wildest races in IndyCar history at the Indianapolis Motor Speedway Road Course on Saturday.

With the threat of concerning weather forcing the series to push up the start time for the race, teams were caught in the crosshairs of a few unknowns that created vastly different strategies down pit lane. In the fifth race of the season Honda was finally able to prevail to break a cycle of wins by the Chevrolet camp dating back to Long Beach in 2021 – the season finale that was also won by Herta. 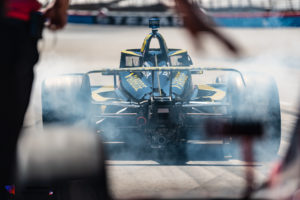 The race was originally scheduled for 85 laps, however due to rain and a number of on-track incidents, series officials were forced to shorten the overall length of the race to fit within its 2-hour allotted time limit. With the falling rain and shorted time, the race was effectively over on lap 72 when Juan Pablo Montoya, driving the number 6 Chevy for Arrow McLaren SP, hit the outside wall in the oval turn 1-2 short chute bringing out the final caution of the race.

Herta, who had pulled out to a 3.82 second gap ahead of fellow Honda driver Simon Pagenaud, had this to say in victory lane:

‘This is the hardest race I think I’ve ever done. Wet to dry, dry back to wet. Thank you so much for the Hoosiers for sticking around. I know you’re used to this weather, so thank you very much. Love you guys.’

"That was the hardest race I think I've ever done.@ColtonHerta reflects on his hard fought win at the @IMS road course.#INDYCAR // #INDYGP // @FollowAndretti pic.twitter.com/itZ5H4RQdj

Rounding out the top-10 for the day was Felix Rosenqvist ahead of 2-time Indy 500 champion Takuma Sato, rookies Callum Ilott and Christian Lundgaard, and in 10th place, after running out of fuel and going a lap down, was 6-time champion Scott Dixon in his number 9 PNC Bank Honda.

The ‘Month of May’ continues

The NTT IndyCar Series made its way to hallowed ground for the month of May as teams began preparing for the 106th running of the Indianapolis 500. With the GMR Grand Prix over, teams will re-focus their efforts on preparing the fastest cars they can as the first official day of practice kicks off on Tuesday, May 17th. the next 2 weeks will be the most grueling for teams and drivers as they put their machines through 9 practice sessions, two qualifying sessions, a pit stop competition, and the eventual race on Sunday, May 29th.

As with all sports, there is only one must-win event for Indy Car – the Indy 500. The crown jewel of American open-wheel racing, it’s the one race that everyone wants to win and is often times considered to be more important for your career than a championship. Last year, Helio Castroneves made history, becoming the 4th person to ever win the event 4 times and joined the company of the greats – A.J Foyt, Rick Mears, and Al Unser. This years addition will see 8 former winners all vying for their 2nd, 3rd – or in Castroneves case – 5th Indy 500 victory, with Juan Pablo Montoya joining the field in search of another Borg Warner trophy.