Formula 1’s final day in Barcelona was eventful, to say the least, as multiple red flags, failures, and an emergency change in schedule dominated the days headlines.

The morning session got off with a bang, as five red-flag periods disrupted the teams time on track, many of which saw their day scrapped after being involved in the stoppages. AlphaTauri lost the afternoon session after Pierre Gasly lost control of his AT03 and hit the barrier, while the Aston Martin of Sebastian Vettel stopped on track with an oil fire.

Perhaps most spectacular of all was Fernando Alonso’s hydraulic leak, leading to the back end of his Alpine to catch fire in dramatic fashion ending the teams day early.

Mercedes back on top 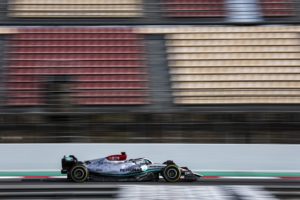 Meanwhile, seven-time world champion Lewis Hamilton and teammate George Russell topped the charts in the final day of testing, planting Mercedes back on top over what was predominately a Ferrari and McLaren-led test. Hamilton’s 1’19.138 set on the softest compound in the afternoon session was the fastest time of the day and the week, with Russell less than a tenth of a second behind.

Red Bull recovered from their breakdown in day two with Sergio Perez posting a lap two-tenths quicker than teammate Max Verstappen; putting both Red Bulls in 3rd and 4th for the day ahead of the 5th fastest time of Sebastian Vettel prior to his retirement.

The Scuderia squad finished the final day in 6th and 7th, with Charles LeClerc once again ahead of his Spaniard teammate. Ferrari had a strong showing during testing, covering the most number of laps (439) of any team. It’s early yet, but be on the lookout for Ferrari to have both cars up front challenging Mercedes and Red Bull at the first race of the season.

For the final afternoon session, the FIA brought out water trucks to soak the course for simulated wet-weather running on the new 18″ Pirelli tires, allowing teams to simulate visibility and overall aerodynamic impacts of water on the new 2022 regulations. This was short-lived as the track soon dried out, allowing many drivers to set their fastest laps of the day on a green track.

Formula 1 regroups in two-weeks time, on 10-12 March, in Bahrain for the second three-day test prior to the season opener on March 18th. 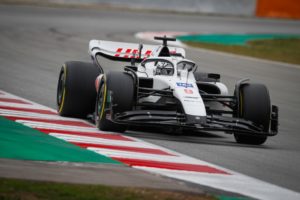 As stated yesterday, the HAAS F1 team removed all Russian colors and Urakali branding for the final day of the test, a swift move in separating themselves from growing controversy of the US team’s involvement with Russian corporations. Team principal Guenther Steiner stated, when questioned about the teams continued association with Urakali:

‘We have to sort out all the legal stuff, which I cannot speak, about next week…We will work through it next week’

The lose of a title sponsor such as Urakali deals a significant financial blow to the small team, but team owner gene Haas and Steiner have affirmed that the team will be able to withstand the impact, as they are in good standing with their financing. Steiner also confirmed that with the loss of Urakali, driver Nikita Mazepin’s future with the team could be at stake.

‘(Mazepin) is putting a tough face on it. I mean, for sure it bothers him because it’s his home country. There is no guarantees anywhere.’

If Mazepin is unable to continue his duties with the team it is anticipated that Pietro Fittipaldi, grandson to former world champion Emerson Fittipaldi, would assume the role. Fittipaldi previously raced for the team in 2020, when he filled in for an injured Romain Grosjean at the final two races of the year.

Russia out, Turkey in?

It was announced this morning that effective immediately the Russian Round of the 2022 Championship will not go ahead amidst the Russian occupation of Ukraine. Formula 1 released the below statement on their website regarding the stance it is taking:

The FIA Formula 1 World Championship visits countries all over the world with a positive vision to unite people, bringing nations together.

We are watching the developments in Ukraine with sadness and shock and hope for a swift and peaceful resolution to the present situation.

On Thursday evening Formula 1, the FIA, and the teams discussed the position of our sport, and the conclusion is, including the view of all relevant stakeholders, that it is impossible to hold the Russian Grand Prix in the current circumstances.

As of writing, the weekend original slated for Sochi is rumored to be moved to a familiar location, Istanbul Park in Turkey for the Turkish Grand Prix. Originally dropped from the Formula 1 calendar in 2012, the track has made an appearance on the F1 schedule in the previous two years due to COVID-19’s disruption of Worldwide events.