The last time that Vincent Verschueren stood on the top step of the podium in the Belgian Rally Championship was the Sezoensrally 2018. But Vincent Verschueren and Filip Cuvelier broke their drought and have won the 47th TAC Rally, the third round of the Kroon-Oil Belgian Rally Championship. Even a loss of power on the very last special stage could not keep the VW driver from winning. In a very exciting final phase, second place went to Niels Reynvoet for Maxime Potty, who paid for an ultimate attack with a flat tyre. 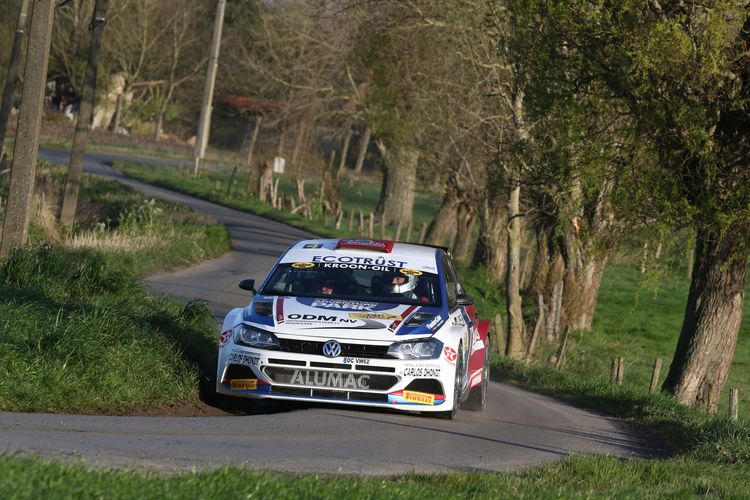 However, the first leader of the race was Gino Bux, who set the fastest time on the opening stage. With his Skoda, Bux seemed to be doing well in the championship, but on the third test the gearbox broke. From that moment on, Vincent Verschueren, who drove his first BRC round of the season in Tielt, convincingly took control of the race and eventually won with a 58″1 lead.

“And yet it was still exciting until the last meters, because on the last test, the Poelberg, I had a loss of power and I had to reset the engine,” said the 42-year-old East Fleming clearly relieved. “After the first lap I checked the race. I drove a smooth rhythm, without diving into dangerous tightropes to avoid punctures. We found a really good set-up for the VW Polo!”

The second place was long in the hands of Pieter-Jan. Michiel Cracco, but when he had to change the clutch of his Hyundai, his team needed 3 minutes too much time to make the change. With a 30″ time penalty Cracco fell back to fourth place behind Niels Reynvoet and Maxime Potty. Cracco gave chase, but on the penultimate test he went over the limit and off the track.

“We had tightened the set-up of the Hyundai to take back our second place, because we had it firmly in our hands when the clutch broke. But, with that hard suspension, we suddenly lost control when the car pulled out of a tightrope. jumped,” said navigator Jasper Vermeulen.

Maxime Potty gave his all on the last test, but he made a mistake on the last test and reached the finish line with a flat tyre. “That’s part of the game. I tried it and I made a mistake,” said the 22-year-old Citroën driver. “This morning I found it very difficult to estimate the grip of the asphalt. I discovered the stages and mainly wanted to finish to do a good job in the championship.”

It seemed to work with a nice third place, but the hub of the front wheel was broken, so Potty lost his beautiful podium place. Third place went to Sébastien Bedoret, who struggled with a lack of evolutions on the Ford Fiesta. “We have improved the car’s settings and we have worked hard to master the Fiesta for the next races. By then I hope to have the right technical evolutions, but that will depend on the delivery times.”

Timothy Van Parijs was by far the fastest Porsche driver, although Glenn Janssens held up well until his engine problems. With a fourth place overall, the victory in GT and especially the victory in the BRC Master Cup, Van Parijs completed an almost perfect race, despite a slip on the Poelberg. Dennis Rostek finished in a nice fifth place, ahead of Bert Coene, second in the Master Cup with his first generation Ford Fiesta Rally2.

In the Junior BRC, the race was completely dominated by Gilles Pyck, who even took 7th overall with his new Renault Clio Rally4. Second place went to Jonas Dewilde ahead of Maxim Decock. In the Historic BRC there was no match for Paul Lietaer, 8th overall with his Opel Ascona 400, ahead of Pieter-jan Maeyaert with his BMW M3 and Jeroen Van Wanseele in the Ford Escort rented from Lietaer.

Philip Lommers was the fastest in the M Cup and Benoit Verlinde won the first round of the Clio Trophy Belgium ahead of Jeroen Catelin and Casper Nielsen.