Solans – returning to the series after missing round two due to financial struggles – ended the first full leg a handful of seconds down on Mónzon, who had grabbed the lead early on Friday.

Set-up issues initially hampered Solans on the opening morning and he struggled to prevent his Volkswagen Polo GTI R5’s front tyres from overheating, although the situation was improved after some handy tweaks in service. 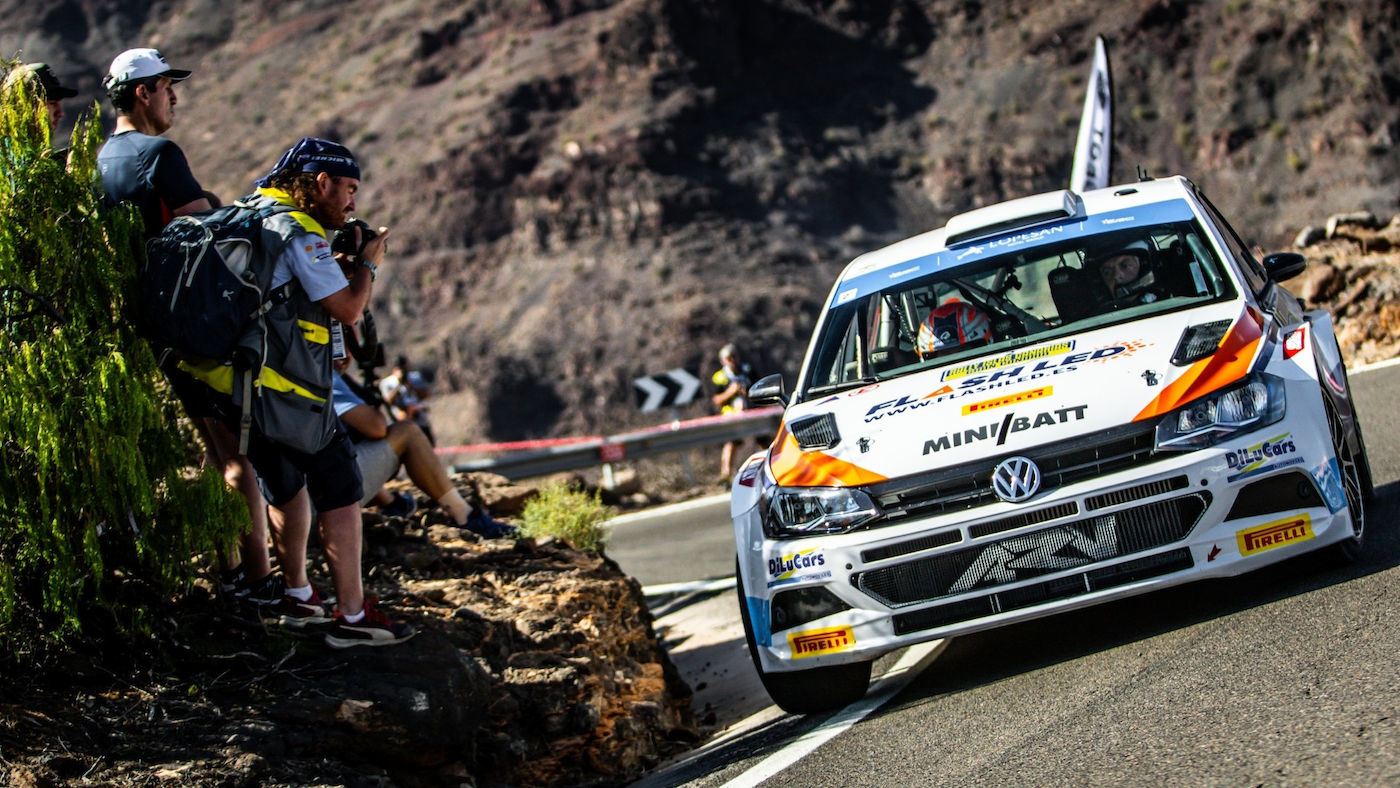 Monzón was looking good for his fourth Rally Islas Canarias triumph as he outpaced Solans by 3.0sec on Saturday’s opener, but disaster struck on the very next test.

The 56-year-old discovered a screw which had found its way into one of his Škoda Fabia Rally2’s tyres. There was no time to change the wheel before the stage and the tyre eventually gave way after 4.3km, plunging Monzón into retirement laola1 id-28 END

Solans then seized the top spot and led by 10.4sec from Citroën C3 Rally2 driver Yoann Bonato heading into the final loop. He enjoyed a trouble-free drive over the closing tests and went on to clinch victory number two of the season by 11.2sec.

“It’s amazing to win here,” beamed Solans. “I have to say thanks to everybody, all my sponsors and the team as well. This victory is absolutely for them, and without them we couldn’t achieve this.

“We were struggling a lot with the car because we didn’t have the time or money to do a pre-event test, so during the rally we were changing and improving things.

“I want to go to [the next round in] Poland, but let’s see if we can find the support to do it,” he added. 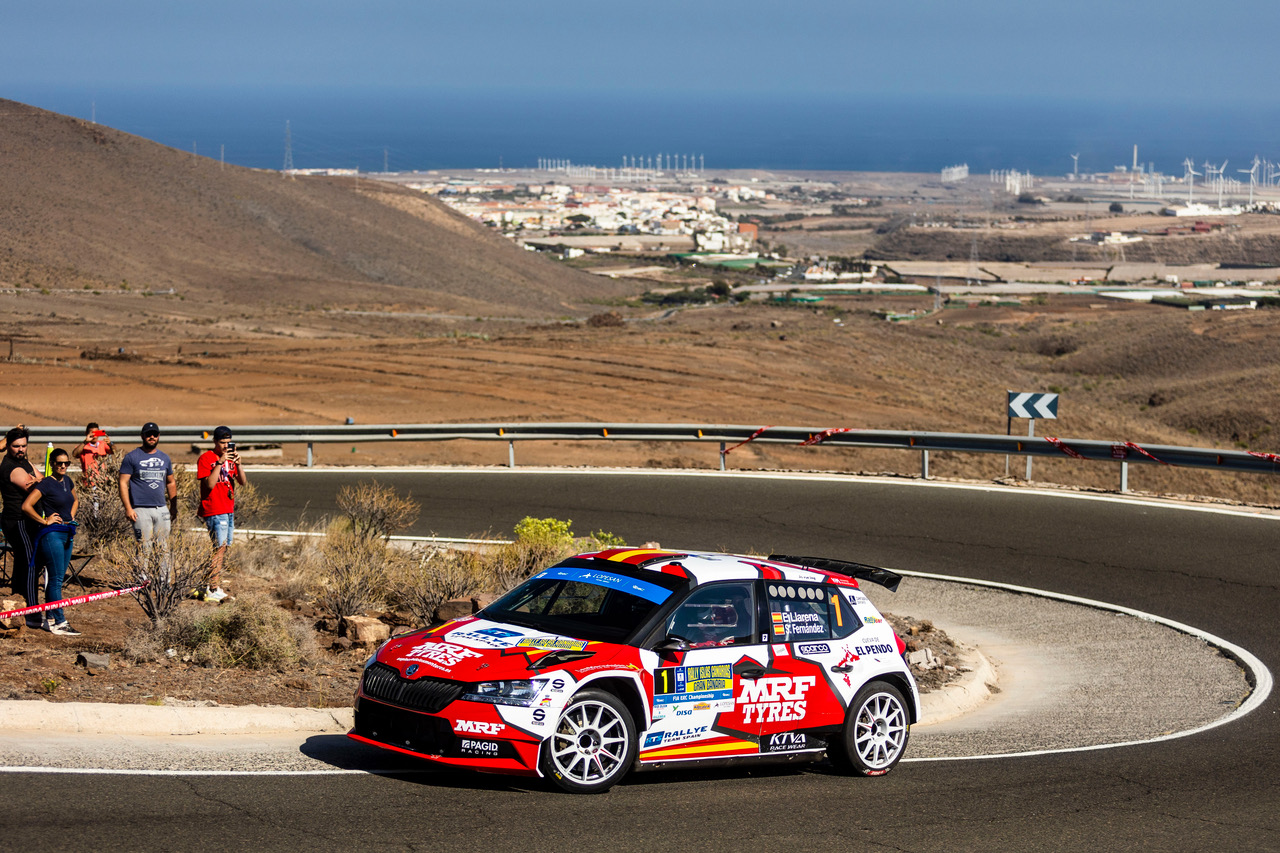 Llarena reduced Bonato’s deficit to just 0.7sec ahead of the Power Stage before outpacing his rival on the finale to end the rally on identical times. Llarena took second on countback having set the fastest time over the first non-superspecial stage, moving into the championship lead in the process.
Enrique Cruz was the highest-placed Canary Islander and brought his Ford Fiesta Rally2 home 12.7sec behind Bonato to take fourth. He had 45.3sec in hand over Škoda rookie Pep Bassas, who celebrated his best-ever ERC result.

Simone Campedelli had a mixed event. The Italian driver clinched his first stage win since the 2019 Rally di Roma Capitale on Saturday, but slid his MRF-shod Fabia into an armco barrier shortly afterwards and dropped from third to ninth overall.

Despite the car’s tailgate flying open on SS10, Campedelli fought back to claim fifth, ending 1min 28.0sec off the leading pace. Javier Pardo dropped two places in the afternoon to finish 18.1sec behind after nursing a turbocharger problem on his Fabia.
Simone Tempestini overtook Norbert Herczig in the final blast to pinch eighth by just 1.8sec as Alberto Battistolli rounded out the top ten. All three were steering Škoda cars.
Simon Wagner salvaged maximum bonus points from the Power Stage after restarting following his Saturday crash. Sadly his fellow Fabia driver Grzegorz Gzryb wasn’t so lucky as he went off the road on SS9.

Joan Vinyes and Igor Widlak were the sole finishers in ERC Open and ERC3 and so took the honours in their respective classes. Frenchman Laurent Pellier won the ERC4 and Junior ERC categories, while Paulo Soria topped the Clio Trophy by Toksport WRT Standings.

The series reverts to gravel for Rally Poland next month. The fourth round is based at Mikołajki on June 10–12.